After an hour of bus ride from San Gil, the bus pulled up at the main square of Barichara. We were ready for an adventurous weekend in Barichara; the white-washed colonial architectural town covered with stone roads and surrounded by beautiful landscape in Santander, Colombia.

“Come on guys, let’s check out this town!” I said as I tried to contain my excitement to Shang and Charlie, my two travel companions.

It was the first weekend of our school term, our first getaway from Bucaramanga and our first time winging a trip with no plans and no accommodations booked. It was exhilarating! 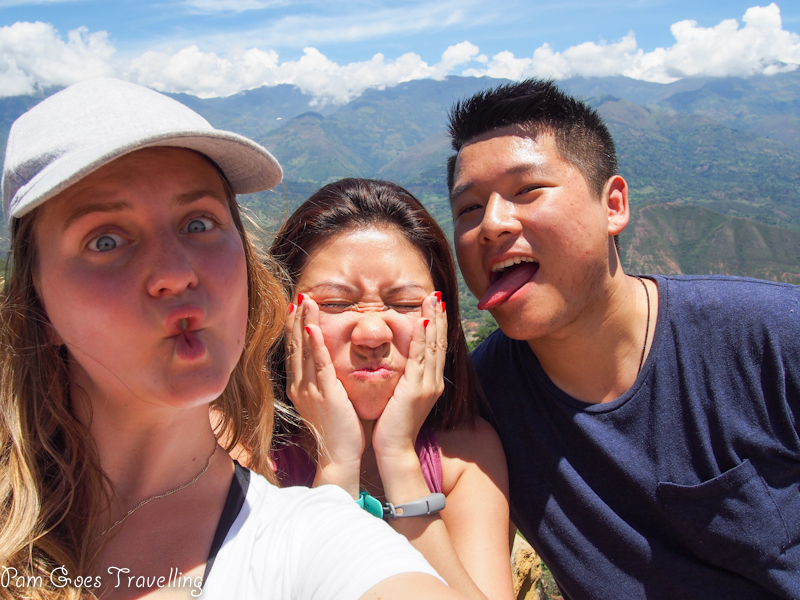 Winging the weekend with friends

We only decided that we are going to spend the weekend in Barichara the night before. Arrived early the next morning at the bus terminal of Bucaramanga and departed with the earliest bus with available seats.

After alighting from the bus, I was struggling to get my orientation. I turned myself in different directions base on Google Map app on my mobile phone.

There was a couple carrying a bag full of tomatoes, mushrooms and other fresh groceries approaching our direction. After some introduction, we exchanged friendly hellos and hugs. They were Santiago who attended the same school as Shang and Charlie and the girlfriend, Paola.

They showed us to the hostel, Color de Hormiga* where they were staying in when they learnt that we were looking for accommodation. The hostel was a block away from the main square.

The hostel has very chill vibes with many hammocks hanging from those pillars, an equipped kitchen and rooms with private bathrooms. I took a liking for the relaxing ambience. Besides, there were no reasons to say no to a place with hammocks, good vibes and awesome people.

Shang, Charlie and I explored the picturesque town and soaked up the vibe of the laid-back town. We were clicking away on our cameras with our always-ready models (read: ourselves) and perfecting our OOTDs. It was not difficult to fall for this friendly laid-back town.

A heavy downpour in the afternoon forced us to take shelter in a little cafe, Raspaderia Barbara.

The cafe turned out to be a perfect hideout for it was cosy and had friendly staff. We wanted a jug of Sangria but the staff informed us that it was not available as they do not have the ingredients. Not wanting to disappoint us, the lady boss went out in the rain to get those ingredients to make our jug of Sangria. Thumbs up for the excellent service. We had such a good time being a little tipsy with our sangria with the pouring rain outside.

The rain subsided before nightfall and our stomachs started to growl. We needed food. Charlie recommended Shambalá, an open-concept restaurant where it made you feel like home. You will see them taking the food out from the refrigerator, then prepare and cook behind the counter. I loved the idea as it made me feel personal. As though someone invited me home to share his/her kitchen space with me.

Shang and I shared a plate of Costillitas BBQ (BBQ pork ribs) and Alitas de Pollo (Chicken wings). They were so tasty! The pork ribs were tender and marinated so right and those chicken wings, oh man. They were heavenly with special marinated spicy sauce coated on it. I dared claim that they were one of the best I tasted in Colombia!

Trekking from Barichara to Guane

The next morning, we woke up early to do a 5 km hike to a nearby town, Guane because our hostel owner advised us not to start our hike too late. This is to avoid the scorching sun by mid-morning as most part of the walk will be under the sun with little shelter.

It was an easy and leisure trek as we were walking on flat ground. The walk was especially refreshing for me since I am such a typical city girl. A city’s bustling traffic, tall buildings, pollutions, and people were replaced with luscious trees, sweet-scented flowers, domestic animals, birds chirping, and fresh air. I loved it!

Along the way, we stumbled upon a home-cafe that we just cannot resist. We walked in to enjoy a glass of freshly squeezed strawberry juice and checked out those crops from the vegetation in front of their home.

Eventually, it took us more than an hour to reach Guane because we took many photo stops and admired what nature offered us every now and then.

When we arrived at Guane, first it was to hunt for breakfast. We eventually settled for a typical Colombian breakfasts of toasts, coffee, eggs and arepas.

Arrived at Guane, it did not take us long to explore the tiny town. The town has an archaeological and paleontological museum, shops that sell local handicrafts and restaurants that make local food.

We returned to Barichara via a mini-bus that shuttled people between the two towns. Paola and Santiago invited us for a home-cooked lunch with them. Chicken spaghetti by our dear Chef, Santiago. We even paired our lunch with a bottle of Chilean wine. Very classy I say. Paola is a lucky girl.

We spent the afternoon learning random Spanish phrases and worked on our pronunciation with Paola and Santi. Since we only had a few days of school which barely got us started on a good foundation of Spanish. Hence, it was a great time to start.

Similar to all other languages, one of the first words one learns has to be a bad word. So we did, courtesy of Santi! <3

We spontaneously decided to watch the sunset from a spectacular viewpoint over a cliff, El Mirador. To make the evening extra special, we brought along a bottle of wine we bought from the supermarket. Together, we wrapped wine glasses we borrowed from the hostel in a piece of cloth and whisked off in two tuk-tuks.

When we arrived at El Mirador, the sky was looming with clouds as the sun hid behind orchestrating the changing colours. It was not the kind of sunset I was hoping for.

“Salud” we toasted to the new friendships as we clinked our wine glasses together.

At that moment, I understood that the evening was not about the view but it was the company of friends. It turned out to be one of my favourite memories of the weekend in Barichara. We enjoyed the cool breeze, drank wine, shared crazy laughters, cracked lame jokes and made meaningful conversations. It was them that made the evening special.

The moment had imprinted itself deep in my memory. It was a special moment I shared with these kindred spirits. The new and not so new friends, we created a special bond.

The temperature started to dip as the sky turned dark. As much as I wish we could let the moment linger on, we had to leave because we were FAMISHED. Paola recommended a restaurant, Filomena where she boldly claimed that they served great burgers.

The restaurant was beautiful. There was a photo spot with different props provided to take photos with. It had quirky spots and quotes all around. Every touch of decoration went through a well thought off process.

She was right, those burgers were delicious. Shang ordered the special burger, Barichara and he claimed that it was the best burger he had ever eaten. Thus, it was a good recommendation!

Hormigas culonas, a specialty of Santander

Back in the hostel, we ran into a French couple whom we met at the viewpoint. They bought a packet of the delicacy of Santander, hormigas culonas, big-bottom ants. Yes, they are a delicacy, a speciality of Santander for it is loaded with protein and low in saturated fats. They are usually fried or roasted. Being adventurous, I accepted the offer for a couple of hormigas culonas without much persuasion from my friends.

Well, it was crispy and had not much taste except for the salt for seasoning. Surprisingly, I was able to stomach it better than fried mealworm I tried once before.

We stayed on for another night and woke up to a lazy morning. We visited Capilla de Santa Barbara, a 400 years old chapel that situates on the top of the town, a hard to miss. The interior was simple with a small altar. 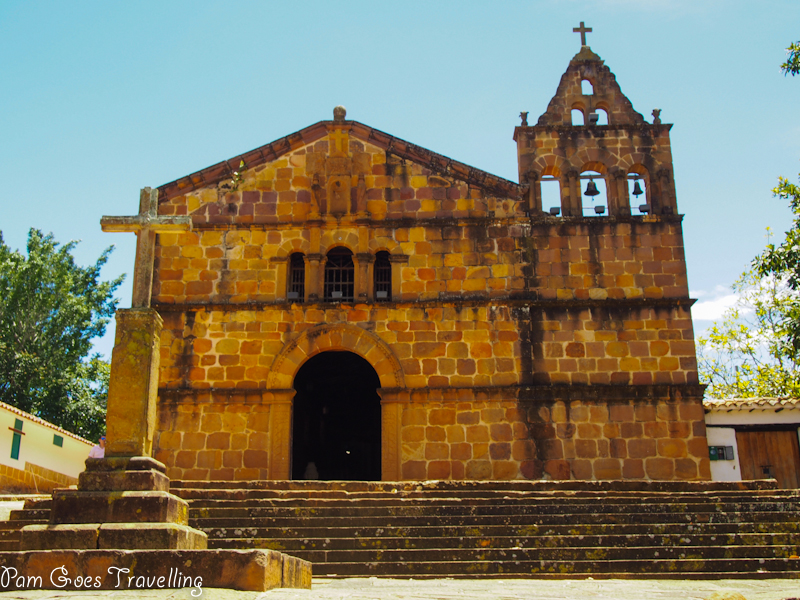 We even squeezed in some time to stop by the cemetery where yellow feet lie. Yellow feet, also known as patiamarillos in Spanish refer to the people of Barichara, named after the yellow coloured streets. 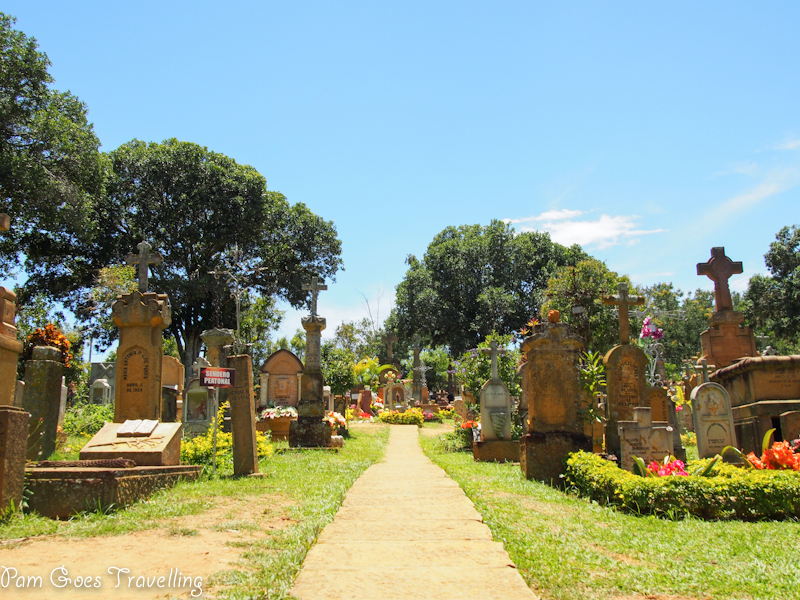 The weekend had been so incredible and the town had me spellbound that made leaving a little hard.

I dug how spontaneously we winged the weekend with no itinerary. We had no expectations and just went with the flow. We ended up staying the two nights in Barichara instead of one because we loved the town too much.

The weekend in Barichara was by far one of my favourite trips I had taken in Colombia. Winging a holiday, not knowing what to expect and turns out life rewards you with so much more, of friendships, laughters and memories that I will keep in my heart forever.

*Color de Hormiga has closed down at the time of writing. ????