Power of Mother Nature never fails to leave me in awe, whether its beautiful creations or powerful destructions. The beauty it brings always make me realise how privilege I am to be able to appreciate such views.

When I visited Yogyakarta, I witnessed both beauty and damages Mother nature caused. In this post, I am going to share on the flawed beauty which Mother Nature created to its land.

Mount Merapi sits between border of Central Java and Yogyakarta. The last eruption happened in 2010, which was merely 4 years ago. I did not have a chance to explore areas near Mount Merapi however I paid a fruitful visit to the Mount Merapi museum. 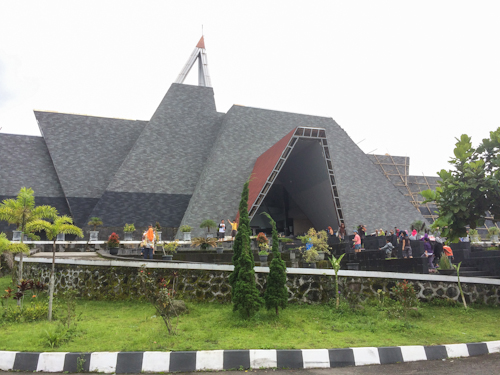 There are different types of volcanoes with each having its own unique character, some spew more lavas while some produce more ashes and such. 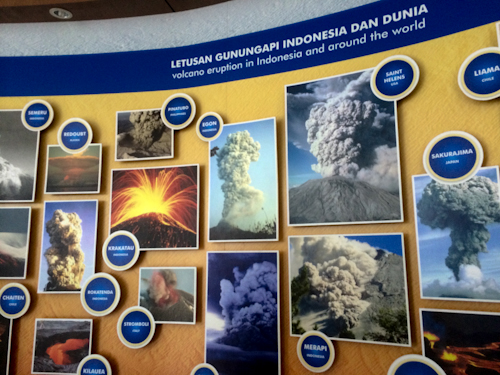 It is not just the flowing lavas that are dangerous, toxic gas that was being release into the air and ashes are dangerous too.

Things you should look out for during a volcano eruption. 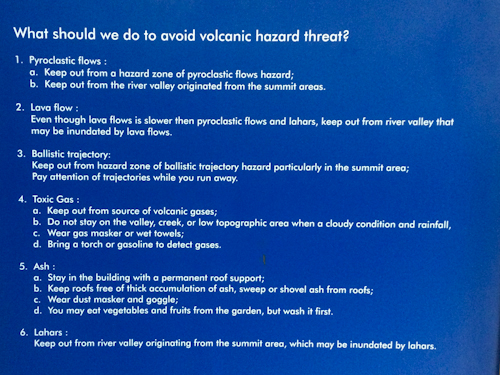 It showcased a bike that was badly damaged and have its parts all melted down to an empty skeleton. If it can happen to a bike, can you imagine all sorts of things it can do to a human? 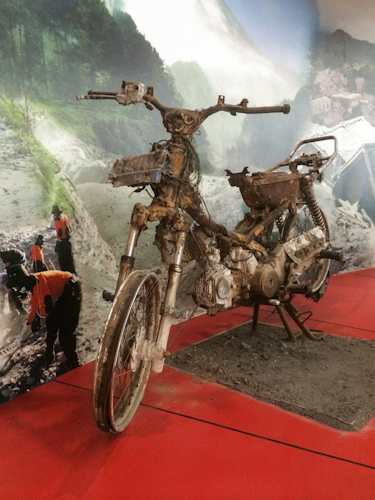 After experiencing PSI (Pollution Standards Index) of 400 in Singapore last year due to the haze brought by crops burning in Indonesia, it was then I truly appreciated the fresh air I breathe in everyday! Just imagine those people who were affected by ashes spewed from those volcanoes, it must be thousand times more worse and deadly! With ashes damaging crops and livelihoods affected, perhaps the only good thing out of the eruptions is to slower the rate of global warming and minerals from lavas which will aid crops to grow better years later.

Sitting at the Ring of Fire, they are not spared from earthquakes either. The last massive earthquake in Java happened in 2006. It claimed lives, buildings and also injured plenty.  Damages it caused has become part of its history that can never be erased.

Entering one of the UNESCO sites, Borobudur which was built in 9th century is one of the largest Buddhist temple in the world. It looks extremely magnificent on the outside and it was just amazing to imagine how people back then were able to build such a huge temple with exquisite carvings without the help of sophisticated machineries.

As spectacular as it may look from the outside, it could not withstand the strong magnitude of earthquakes. Spotted a headless Buddha,  Earthquake was strong enough to break a stone statue that has been sitting there for hundred of years. 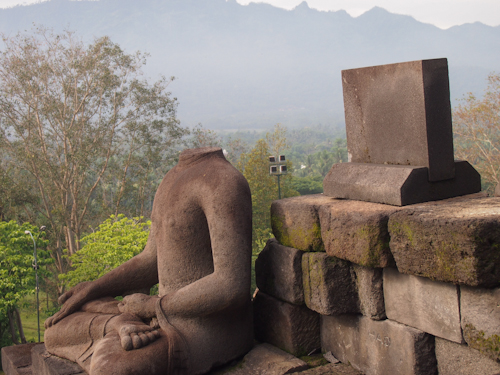 Near the museum of Borobudur, there are bits and pieces of carved stones that they lay on the greens. which are probably pieces that had fallen during those earthquakes. 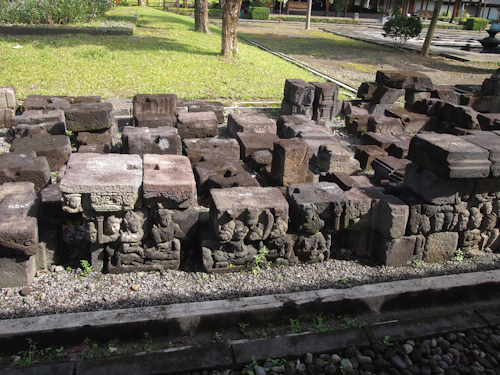 Apart from Borobudur, Yogyakarta also housed another UNESO site, Prambanan Temple. It is the largest Hindu in South East Asia that was erected in the 9th century. It is actually made up of a numerous individual temples that house different gods. As beautiful as it is, it is also a victim of earthquakes.

Due to the earthquake, they had taken precautions at one of the main temples, Shiva. It is considered relatively stable but not as safe as the rest hence they fenced it up and we had to queue to enter. They limit the number of people in its premises to prevent overcrowding afraid that the temple will give way and we were each handed a helmet to wear for safety reason. It is not an easy task to preserve all these heritage sites while trying their best not to disappoint all those who travel here to visit these attractions. 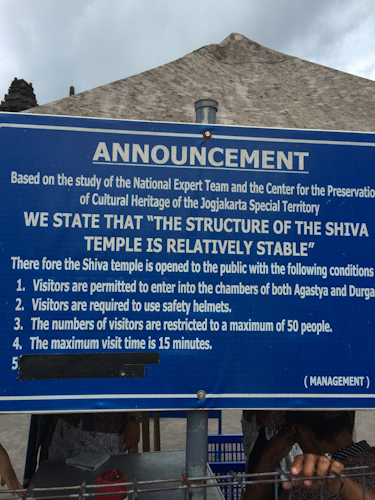 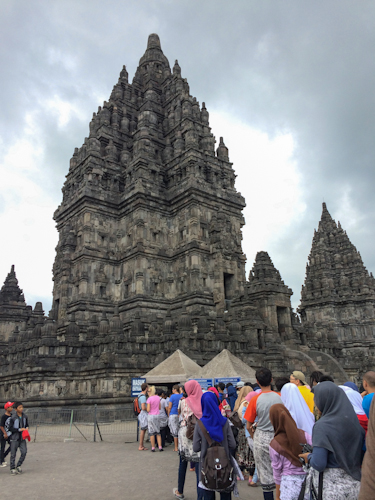 I rather be safe then sorry wearing oversized helmet which God knows how many sweaty heads has worn before. 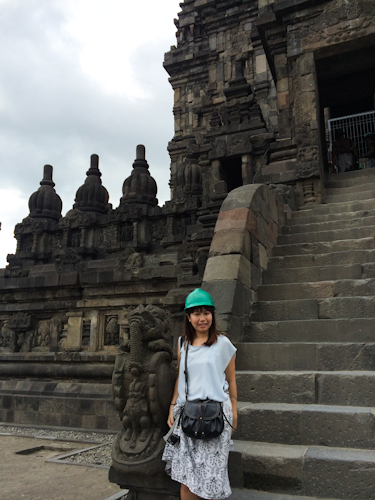 Spotted one damaged stone sculpture that has fallen onto the ground. 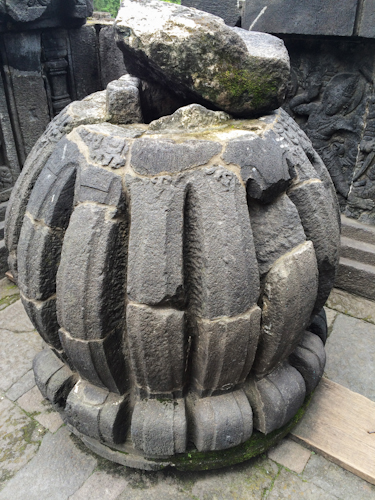 Another evidence of how earthquake is destroying such a beautiful place bit by bit. 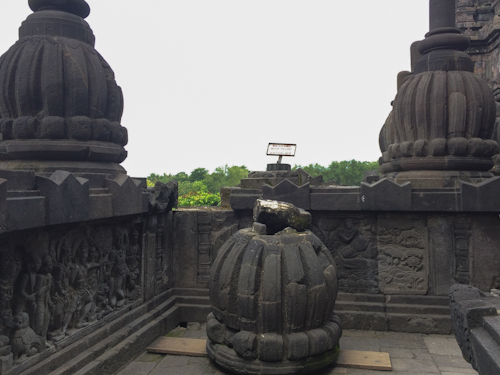 This is certainly not man-made. Tragedies and damages caused by natural disasters are part of its history that will remain, leaving a somewhat bittersweet flawed beauty to these places.

All these serve as a reminder to us, no matter how mighty you think you are, you are just an insignificant being at the mercy of Mother Nature.  In the end, we can only learn how to cope and become better at handling crisis lessons after lessons.

Have you ever been to sites that natural disasters have left a mark/ marks on them? Share with me!