York, a beautiful city with rich history dated way back even before Roman times. Architectures are well preserved till date. A city of long ancient history is probably one of the reason why it was voted the most haunted city in the world.

I was wowed once I stepped out of York’s train station, the prominent city walls opposite the train station you cannot miss. Instantly I knew I made the right decision to visit this laid back history-rich city. I could not help but to get distracted by its beauty as I find my way to the hostel.

An almost mis-adventure on my way to York from Heathrow Airport.

Touched down from my 7 hours flight from Doha, the transit point in the morning, I was pleased that clearing the immigration custom was a fast and smooth process. Yay to their efficiency. From Heathrow Airport, I took Piccadilly line all the way to King’s Cross St. Pancras station. That is the station where you are one train Eurostar ride away from France!

Upon arriving at King’s Cross St. Pancras, my confidence grew because I thought I had everything under control. I was ahead of my estimated arrival time thus I was able to find a decent eating place for lunch before catching the railway train to York which I book weeks in advance via National Rail. I remembered the departure time for the train was 12.57pm so I had my lunch at a burger place enjoying the free wifi from a nearby cafe.

I left the burger place thinking I should have enough buffer time to hop on to my train. Since it was my first time taking  trains there, there were many platforms with trains arriving and departing at different timings. I tried figuring out which platform should catch my train but in the end, I reckoned I should just approach the information counter. Just then, I saw one of the station staff getting out of the office, I approached him showing him my ticket.

He told me the train will be leaving from Platform 8 at 12.53pm. Just as he mentioned the time, he checked his watch to confirm it was indeed 12.53pm! I got a shock because I remembered the timing wrongly! After thanking him, immediately I ran with all my mights (and backpacks) to platform 8, got into the train just seconds before it departed the station. The one and only thing that was flashing in my mind was 97 pounds. The next train ride to York will probably cost me that amount made me even more determined to board the train.

The journey to York was 2 hours, free wifi in Central trains made me a happy girl.

I had my first-hand taste of the typical England’s weather on the first day with gloomy sky that rains and when the wind blow, it got me chilling through to the bones. For a moment, I regretted not bringing a decent jacket along, I only brought along a cardigan and a shawl which serve little purpose in such weather to keep me warm. The only thing that cheered me up thinking I was able to go shopping for warmer clothes which unfortunately did not materialised because the weather changed for the better the next day.

York offers many different type of tours. There are plenty of ghostly tour where you scare yourself silly with their haunted tales and sightings, sight-seeing on those typical hop-on-and-off buses. There is even a York Cat Trail where you explore the city while cats spotting. Being a budget traveller, I opted for a free walking tour which is run by volunteers. 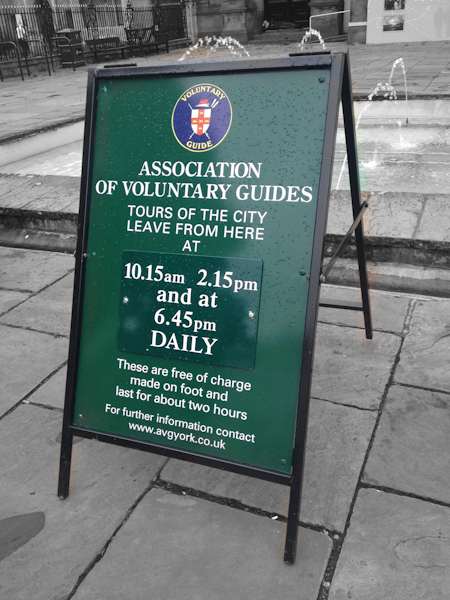 Alongside with me, there were 4 Italian girls accompanied by their teacher, a couple from Canada (I think), a guy from New Zealand and another from Hong Kong.

The tour guide gave us an insight and history behind the beautiful city as we walked to different locations. It was a pity that I could only capture quick snapshots from my phone during the walk due to the rain.  The whole tour lasted approximately 2.5 hours, it is highly recommended to join the tour to have a better understanding of York before exploring the city properly on your own.

Here are some of the pictures I manage to capture from my phone.

After so much travelling, decided to pamper myself to a decent dinner at Stonegate Yard Bar & Brasserie which was just a few steps away from my hostel. I am a lasagne lover and I must say their lasagne is one of the best I have tasted. The portion was huge that I was unable to finish and had to pack the leftover for breakfast the next day. Wallet-friendly beer at £1.50 is so welcoming.

The sun came out to play the next day with clear blue sky making photographs look more lovely and vibrant. 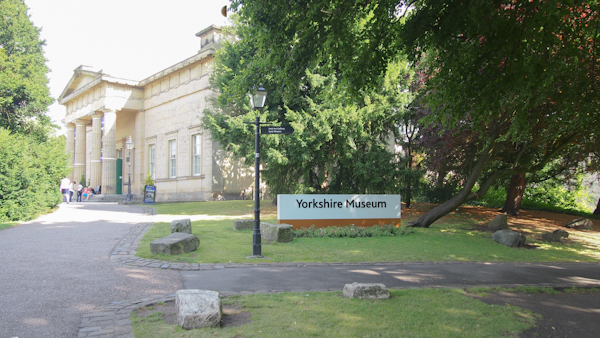 It is a beautiful garden offers opportunities to roll on their crispy grass, or just sit around for a simple picnic, squirrels spotting or just simply takeing a stroll in. 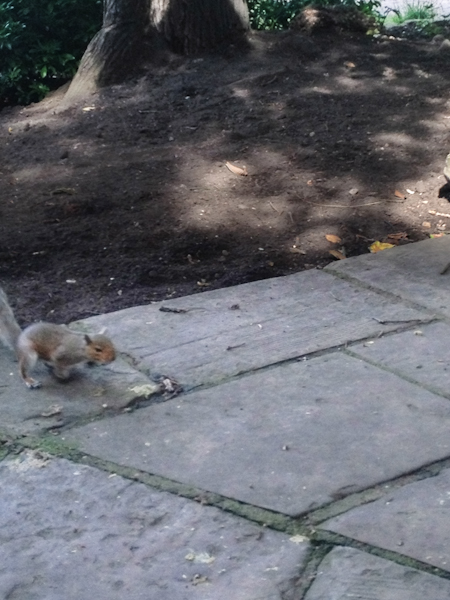 Walking along the path will leads to ruins of St. Mary’s Abbey. Judging from the impressive wall remains, you can easily imagine it being the richest monastery in north England in 10th century.

The 14th century Hospitium nearby is a beautiful place for couples to hold their weddings.

No visit to York is complete without walking along the city walls overlooking the whole city of York. It look almost like the English replica of Great Wall of China in my opinion.

It is fascinating imagining what it was like in those days during Roman Empires where the centre of the city is deeply guarded. Enemies attacked from the outside and they had to defend from the inside. It is almost like an English version of all those Chinese period dramas I watched on TV where fights broke out along the wall with soldiers shooting arrows defending their city and outsiders climbing ladders trying to get in. It was amazing how those walls withstand ravage of time since Romans Empire.

The incredible tower overlooking giving a full view of the inside out of the city.

Largest Railway Museum in the world

Not all museums in York are free but National Railway Museum is definitely free. I have to admit it is one of the reason why I went.

It showcased many different trains and the history of railways. Just look at the large area to display them all.

A cafe area for lunch or quick bites.

Some of the trains look so grand as if they came right out of those fairytales. It seemed so unreal that those used to run on actual railway tracks before.

Claiming that it is the largest railway museum is not a joke because they even have Thomas Train!

Exterior of the train with reflections from the window

Honestly, I am not a fan of those railways or trains so all these does not seems to fascinate me much but at least I learn a little about the railway history. 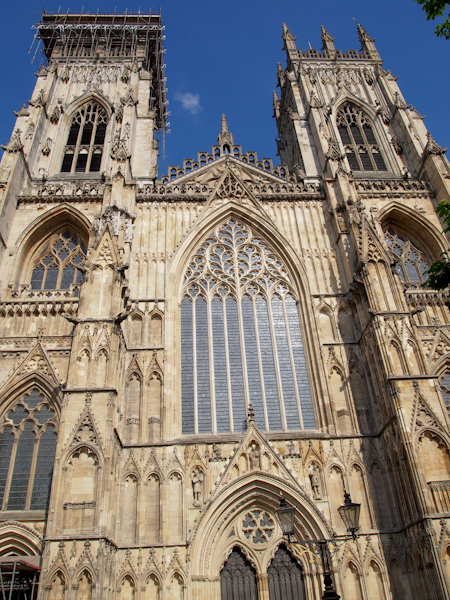 York Minster is one of the main attraction of York. Impressive building withstanding long history and 3 fires, accidental or not. It is currently undergoing a major restoration project with estimated cost of 20 million pounds. Heritage worth keeping are worth up keeping.

Although I am not a christian nor do I understand christianity and bible, in addition, European history is not my forte thus the stories are a little to grasp but it is still a place worth visiting plus they have ‘free’ guided tours to understand the place and history better in which I will touch on in a later post.

I contemplated watching Footloose musical, I was not able to keep up my mind because I really wanted to catch a musical. The point of catching a musical in UK is to watch world-class performance. This musical is a production by teenagers, I am sure they will give in their best for the musical but I guess I just wasn’t that willing to part with my money to watch a mediocre musical. I tried consulting my friends on Whatsapp but due to time difference, they were all asleep so i resorted to ‘consult’ Roundom app on my iPhone. Well, in the end, it gave me two Nos and a Yes so I ended up wandering along the streets, loving every moment, snapping memories, enjoying the last bit of York before leaving for Manchester the next day.

H&M was out of my shopping radar. Walked into a H&M to survey the prices, I concluded that apparels are comparable to the prices in Singapore hence there will not be any cheap good deals that I can find. When a woman shops, she makes sure she does her homework first.

The Fort Boutique Hostel is a funky and clean hostel located just round the corner of City Centre. Apart from running the hostel, the friendly owner also operates a bar just beside the hostel and guests get to eat/ drink there at a discounted price which I unfortunately did not get to try. The staffs at the bar are friendly and helpful.

Booked a 6-bedded room for 2 nights. For both nights it was not fully occupied. Kudos to the additional personal space. Knowing that I cannot match the beds to hotel quality, it falls within my expectation so it was not too bad. The blanket was really comfortable to combat a cold night.

The ensuite spacious and clean bathroom was enough to make me happy. The water pressure from the shower was surprisingly better than expected, a plus point there!

Kitchen and common area are pretty well maintain with free flow of juices, coffee, tea and biscuits. It gave off a homely vibe.

As much as I raved about the hostel, here were the down sides of my stay.

Summer with no air-con, the only thing I could do was to keep the window open and I could hear people from the bar below. It went on and on, thankfully I managed to fell asleep despite the noise. It was not as though they were extraordinary loud, just that sound travels up. I also had problem connecting to their WIFI, I resorted to use the data plan from my phone so it’s not a huge problem for me.

I absolutely love the ancient feel of York! Have you been to York? Did you enjoy it or will York be included when you visit UK?