The last time I been to Malacca was when I was 11, memories were vague. I always wanted to return since, however none of my friends were interested in a weekend getaway. I jumped at the chance when my travel buddy, Aggy suggested that we should head there for a weekend when she comes to Singapore.

Malacca, a UNESCO listed city, it was once colonised by Portuguese, Dutch and British. It also has a strong Peranakan culture which Melakans are proud of.

How can I introduce Malacca without talking about food? It is a food paradise for all the foodies out there!

If there is a long queue, it must be good. It is always the mentality when it comes to food isn’t it? We applied this rule when we were looking for famous Chicken Rice Ball in Malacca!

Joining in the long queue, we cannot be wrong about the food! We queued for about 15 minutes under the fiery sun before we were ushered in for a table for two.

It was literally Chicken + Rice Ball. The menu is quite standard. You either order half a chicken for RM21 or a whole chicken for RM42 and rice ball at RM0.30/piece. The chicken was tender and the gravy (that screams unhealthy into my face) that goes with it was excellent. Spicy lover like me will love their special chilli dip! As for the rice balls, rices are cooked with chicken oil which makes it taste really good and smooth however in order for the rice balls to stick together, it has to be cooked till soft and mushy. I prefer my chicken rice to be harder so that I can feel every grain in my mouth as I chew.

We gave in to the sweltering heat after checking out the main streets, walked into Nancy’s Kitchen by chance and had a bowl of sweet thirst quenching Chendol each. Having a bowl of chendol to combat summer heat is like heaven on earth. Not to mention free WIFI made us very happy.

We completed our dessert with a packet of oneh-oneh. Oooooh… I love the taste of black sugar oozing out in my mouth when I bite on it. Why is it so irresistible and unhealthy?!

Despite being too full for a proper dinner because of our late lunch, dessert and street food, we decided to share a bowl of Nonya Laksa from Jonker88. It is a shophouse with constant crowd. They seemed to be well known for their laksa and chendol but we decided that 1 chendol was enough to last us for the whole day and so we only tried the Laksa. The gravy was just right, giving away the style of Perakanan food and the noodles are cooked to perfection. Gosh, i would love a bowl of this right now.

The next day, after exploring some historical sites in Malacca, we went hunting for Mod Cafe located at 14 Jalan Tokong along Jonker street. It is a concept cafe. Instead of selling traditional desserts, it is a cafe that sells cheesecakes and other sorts of western desserts and drinks.

Yes, that is a a cool camper van that is being converted into a drink station!

Plenty of vintage collections around!

Their signature cheesecake was sold out so we ordered a slice of tiramisu and a crème brûlée which was not too bad.

We could not leave Malacca without having authentic Peranakan food so we checked out Nancy’s Kitchen again for some Nonya food.

We limited our food order to 2 dishes and a bowl of rice to share because we overate during the trip. Ordered a plate of sambal potato leaves and a bowl of assam chicken. Nonyas, just like me love spicy food! Distinct tinge of nonya tanginess in the assam chicken made it very appetising!

Nancy’s Kitchen won my heart and stomach with its salivating Nonya food and dessert. +1 brownie point for their free WIFI! They offer cooking classes to those who are interested in Peranakan cuisine too.

In Malacca, there are hints of colonisation history and strong Peranakan influence.

Baba-Nonya Heritage Museum located at 48-50 Jalan Tun Tan Cheng Lock is worth the visit. We paid RM15 entrance free to this museum but it is worth every single ringgit. This heritage museum used to be an actual home to a Peranakan family who lived here for a few generations. We were lucky that a guided tour just started when we entered. With the tour guide’s careful explanations, we were able to appreciate those minor details, understand their culture, traditions, history and why the house was built this way. It is a valuable tour which I highly recommend to anyone. However do note that no photography is allowed in the museum.

Dutch Square is also known as Stadthuys. It was built when Dutch took over from Portuguese and it was the administrative area for the governors back then. 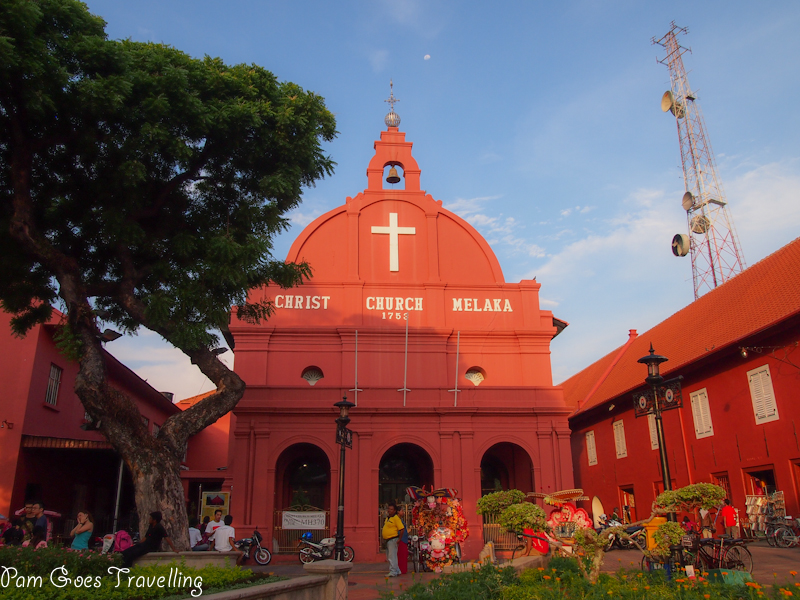 We climbed up to St. Paul’s hill also known as Malacca Hill. It offers birds eye view of the whole city on such a clear day!

Sitting on St. Paul’s hill is the ruins of a St Paul’s church that was built in 1521 when Portuguese were ruling this place.

There are huge old Portuguese tombstones all around. They looked well-preserved till date.

Getting out of the ruins, we followed the path and found a sign which will lead us to Dutch Graveyard.

Visiting cemeteries is  one of Aggy’s favourite things. We were excited to find out where the path leads us to.

Initially, we saw some damaged tombstones along the way. They were somewhat damaged, seems like they were not able to withstand the test of time.

It was just a number of graves along the way, we were slightly disappointed because we thought that was it. It was only when we reached the end of the path, we discovered the actual Dutch Graveyard.

This graveyard was used during Dutch and British times when they took over Malacca. There were 5 Dutch and 33 British buried in this graveyard. Initially when British took over, they used St. Paul’s Hill as their burial ground, it was only in 1818, they started using this area to bury British army and navy personnel and some of their wive.

We ate, we checked out historical sites, we also explored the heart of Malacca by foot!

I enjoyed walking down the funky streets, minus the heat and humidity that is. Old tradition houses mixed with a new hippie style, that is what Malacca is!

Calligraphies on the wall, how cool is that?

Another traditional Peranakan house turned museum, we were told these houses did not have a proper address in the past. Owners will hang up lanterns bearing their Chinese surnames. With that, it helped postmen to deliver mails to all the families correctly. What a brilliant idea!

Walked past an abandon house along the street, it must have been left untouched for long with greens growing untidily. It must be a grand house with a pretty exterior and a front yard in the olden days. I wonder if this abandon house has any interesting history.

Between Jonker Street and Dutch Square, there is a Malacca River. Cruises operate along the river and it cost RM15 per ride. We thought river cruise was too cheesy so we decided to walk along the river bank instead. It has a little European feel if you can ignore the high humidity that is. Pretty romantic to be walking along during sunset. They have little pubs along sides and we returned to chill at night overlooking the river, watching people cruising past us. Pretty cool hangout place to be.

When the sun sets, the weather became more bearable. That is where Jonker Walk came alive! Street vendors starts their business selling food, accessories and souvenirs. Streets were packed with joyous people and people negotiating for the prices of goods.

Although it was just a weekend trip, I am glad we both made it here together!

I had an amazing weekend stuffing my face silly with all the delicious food, visiting historical sites and exploring the streets.

Penang is pretty similar to Malacca, both are UNESCO heritage sites and have long history of Peranakan traditions. The last time I been to Penang was my first flight out of Singapore when I was 6. Memories were dreamlike. How similar and/or different are these 2 cities in Malaysia and which one do you prefer?