Do you have some places that you want to visit badly that you actually felt the adrenaline rush when you are there?  Well, I felt like this when I stepped onto Liverpool Football Club home ground at Anfield.

It was the one and only football club I supported for going 15 years although there are many years in between that I stopped catching all the Premier League actions. For many years,  the ones I watched are Euro Cups and World Cups which only require that intensive few months of excitement. Now, I am back supporting Liverpool F.C full on every weekend. 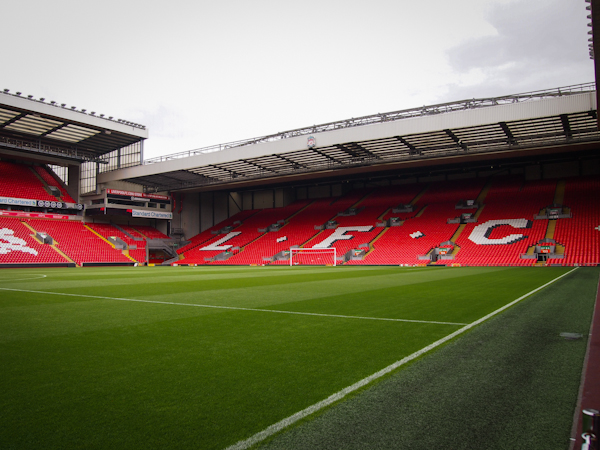 What I used to know about Liverpool F.C were probably all the surface happenings during 1999 to 2002 and my knowledge and memories were pretty much left there until I went to Anfield to learn and find out more about this club I support. In case you do not know, my love for the club started from Michael Owen. (You can call me shallow but I do need that initial motivation to start watching right?) Although the day I visited Anfield, it was a gloomy rainy weather however it did not dampen my mood at all.

Right at the entrance, Mr Shankly, Bill Shankly erected statue was hard to miss. He was the most successful manager in Liverpool F.C history who brought the club to their glory days in 1970’s and 80’s. He is the icon of the club, just like how Alex Ferguson is today. Below his name on the statue it wrote “He made the people happy.” Indeed, he made all Liverpool fans happy.

Collected my tickets from the ticketing booth and as I climbed the stairs to the museum at level two. I saw “This is Anfield” poster on the wall. Ok, ‘Nuff said. I made it here. 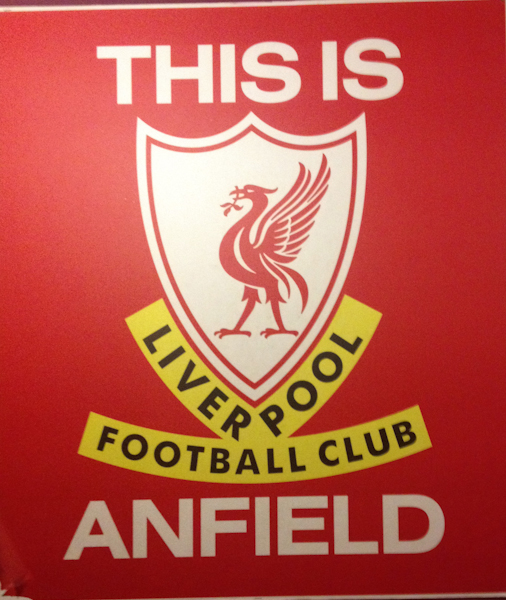 It did not take me long to cover the museum as it was only about three quarter section of that whole level. I was kind of surprised that it was tad small. I was expecting something like Manchester United museum which covered a few floors and I have to spent 45 minutes to an hour to finish. 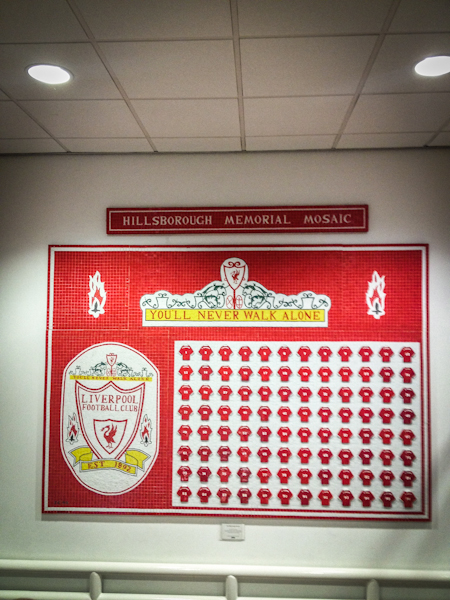 After I was done with the museum, I went to the merchandise shop. I contemplated if it was worthwhile to purchase a Liverpool jersey. In the end, I dropped the idea because I do not bear to part with my £45 but I kept thinking about it when I came back to Singapore. Thank goodness for the good deal off their official website and my cousin was still in UK that time so I got it shipped to him and he brought it back for me. No regrets!

The tour started with the visit to the club’s guest room. The walls are plastered with the past and present of the football club. 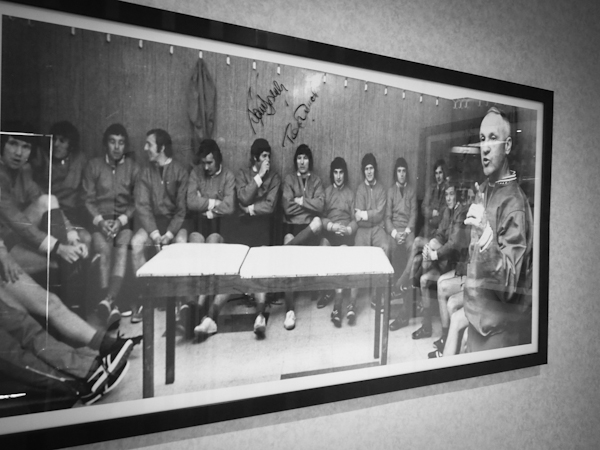 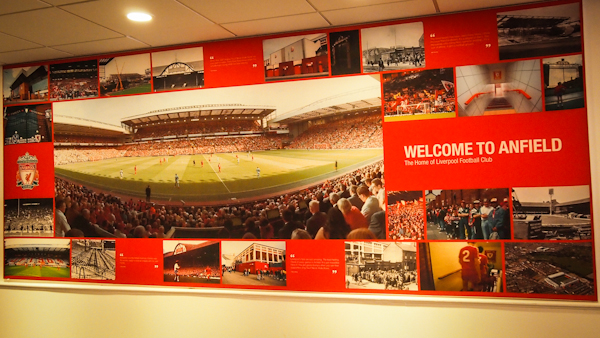 Next, we were being brought to Liverpool F.C Press Room. Part of the room used to be their boot room where strategies and tactics were discussed. It was considered one of the important ‘venue’ at that time.

It was surprisingly small and has power sockets on 3 sides of the walls. There is always an illusion when I watched interviews from TV thinking that it must be a really huge room where they are able to accommodate many press medias only to realise in reality, it was not a huge room. We were told that because cameras are only allowed to shoot within the red wallpaper bearing the club’s name and sponsors hence it creates such illusion. First discovery of the tour! 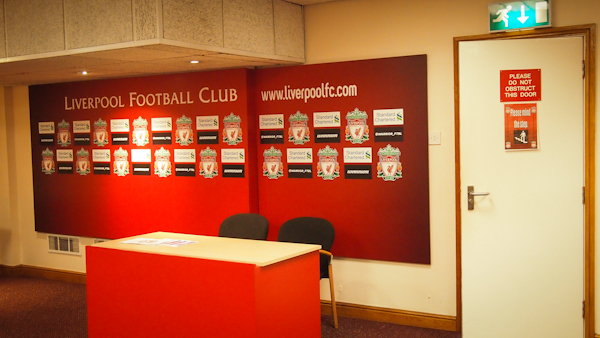 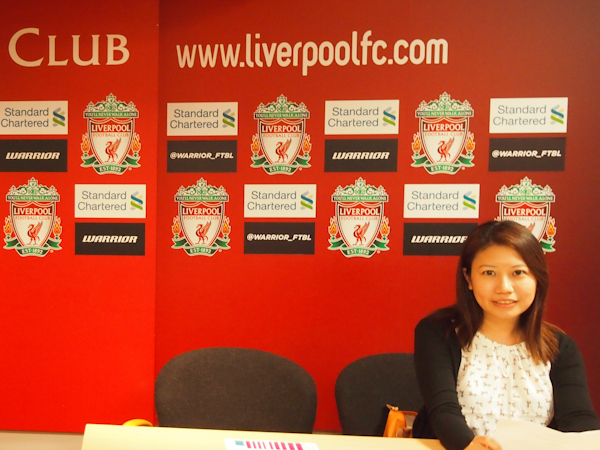 Do I look like Liverpool newscaster now? (Failed in trying to get a photo keeping within the red wallpaper. Boo!)

Everyone was very excited taking photos sitting on manager’s seat pretending to give out their post match speech.

Next up, we moved to Home team dressing room.

There were massage chairs in the middle of the room where the masseuses will massage the sore muscles and they had bathroom attached to this changing room as well. Ice bath helps players to recover faster and prevent injuries after their matches. 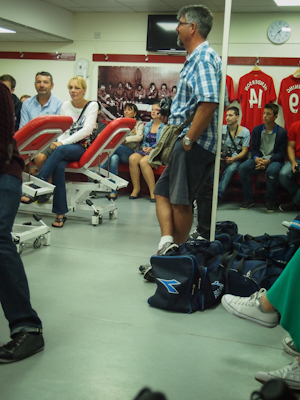 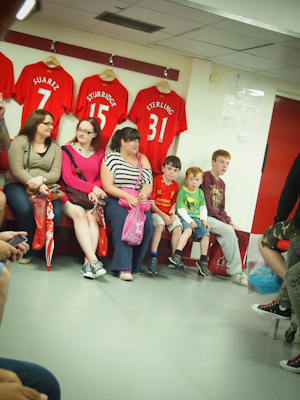 Players who came from non-English speaking countries have to take up English courses to be able to communicate with their mates in the one common language. Only English is allowed in the dressing room just so that everyone cnd understand one another making communication easier on and off field

In the dressing room, players who are playing different positions are put beside one another. Meaning, instead of having all the midfielders changing together at one side of the room and defenders and goalkeeper hanging out at another corner, the striker will change with a midfielder on one side, a defender on another. This is to promote team building and improve communications among players. It is a clever strategy!

One of the reason why their dressing room has no lockers because the team have to learn how to trust one another. How can the players not trust one another off field when they have to put their trust in one another in order to win matches? 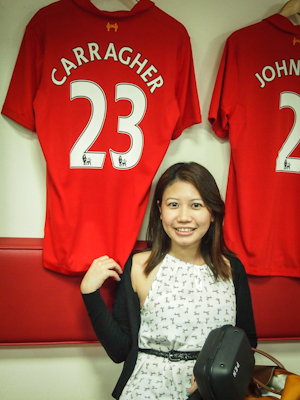 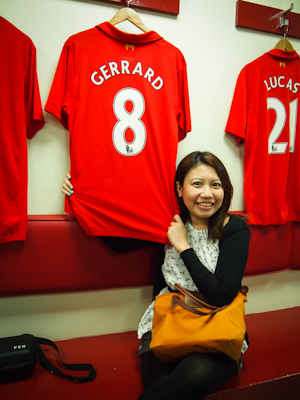 One of the names I was more familiar with back then. Jamie Carragher, the man who retired after serving17 years in Liverpool as a defender.

Steven Gerrard, my HOT favourite in Liverpool. I watch him mature from a boy to a man he is now. He is definitely a Liverpool boy. 😀 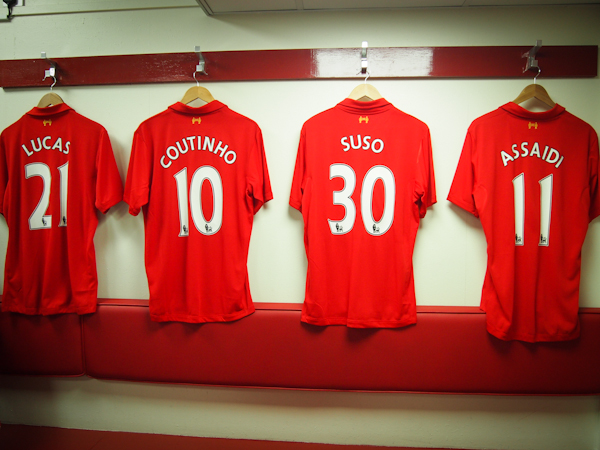 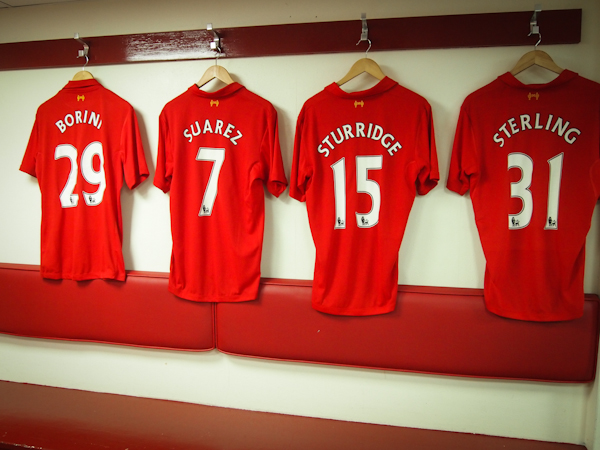 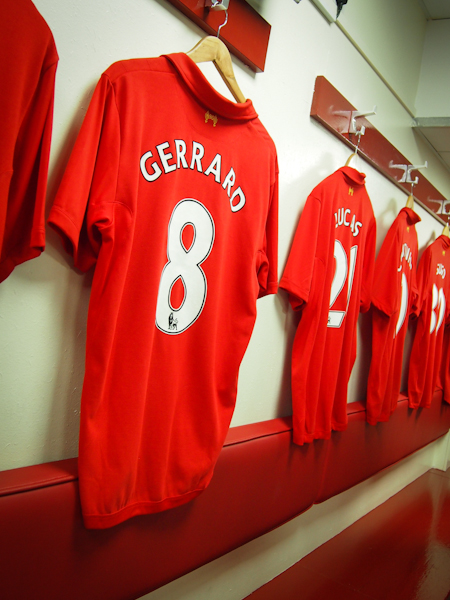 A motivational poster just right at the doorstep of Liverpool’s dressing room reminding the players on the importance of teamwork. Totally inspirational! 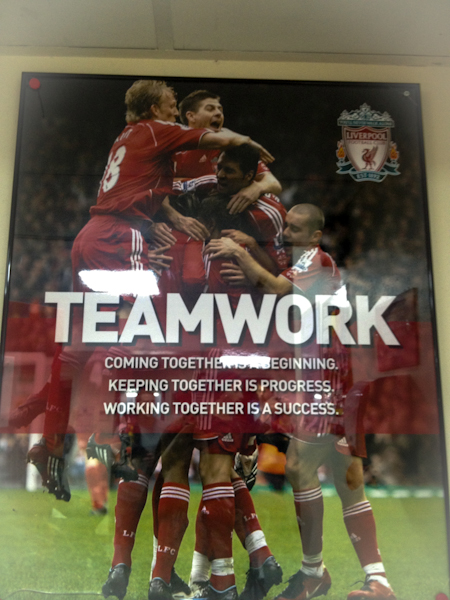 Next, we visited Away team dressing room which was just a few steps away. 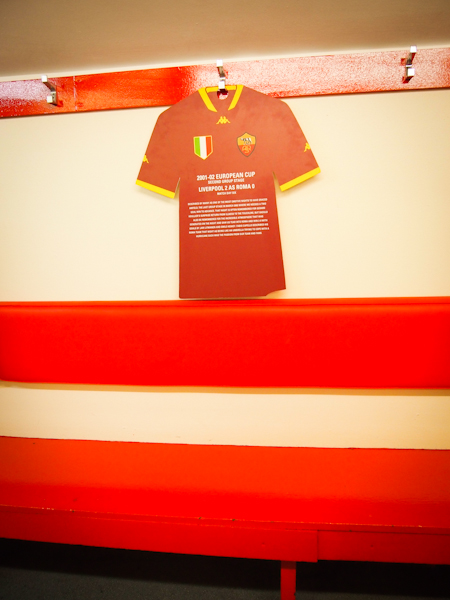 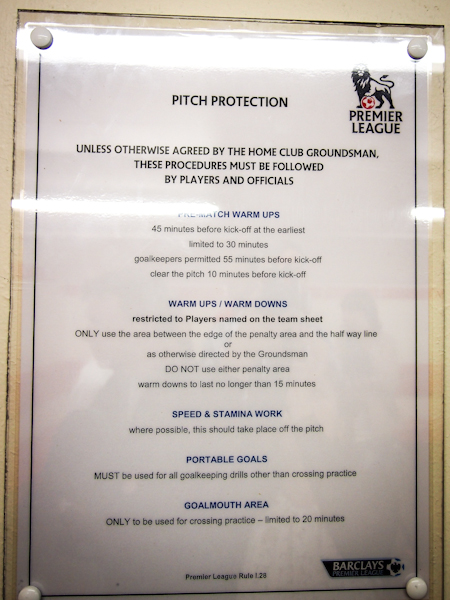 Are there any difference between home and away teams dressing room? Yes, there are! Slight differences. The first difference will be the lights. Home team uses white fluorescent lights which allow players to adjust to the sunlight easily when they play on the field.  However the lights use in Away team dressing room are more yellowish. 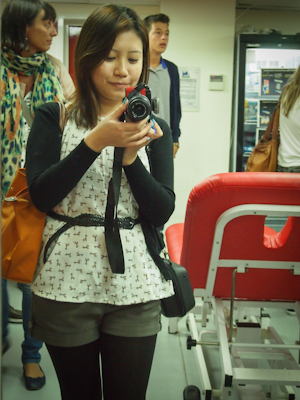 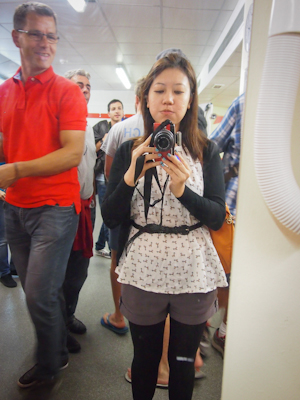 You can call these dirty tricks but hey, I am sure other clubs have their own advantages over away team. It is their home ground after all. According to sources, one of the richest premier league club C*cough* sea’s home and away teams dressing rooms are worlds apart.

After invading the 2 dressing rooms, I were ready to walk through the famous tunnel onto the field! 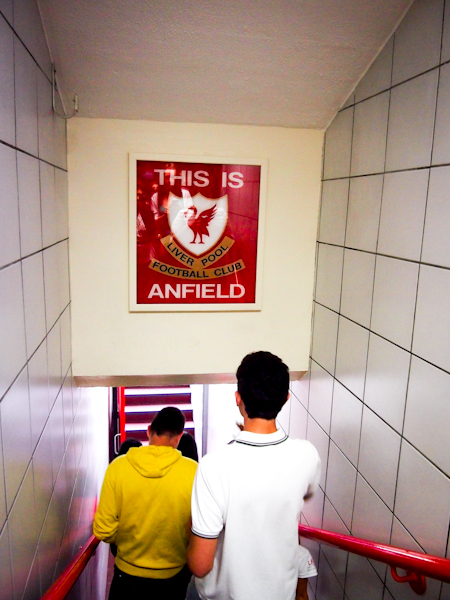 Notice the poster on the wall? In Anfield, there are no welcoming signs. They have signs that says ‘This is Anfield’. It is a form of psychological strategy. To remind Away teams that this is Liverpool’s territory and not to mess around on the field. Brilliant way to intimidate the opposing team.

Aha! This is where countless of important matches are played and histories were made. 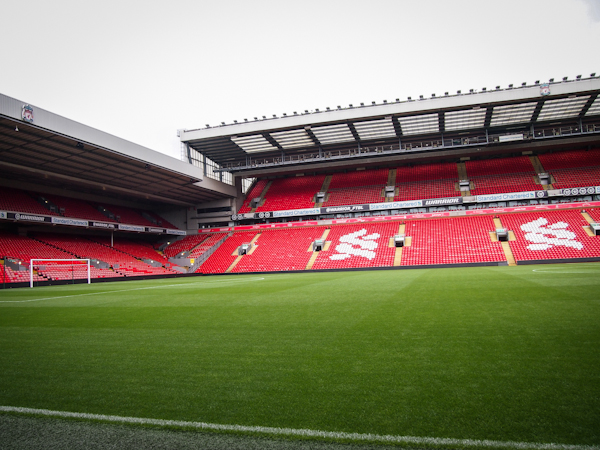 Kudos to the people who are maintaining the field well, There was no trace of a match being played on the field a day before.

Look who’s I have got here in Anfield??? 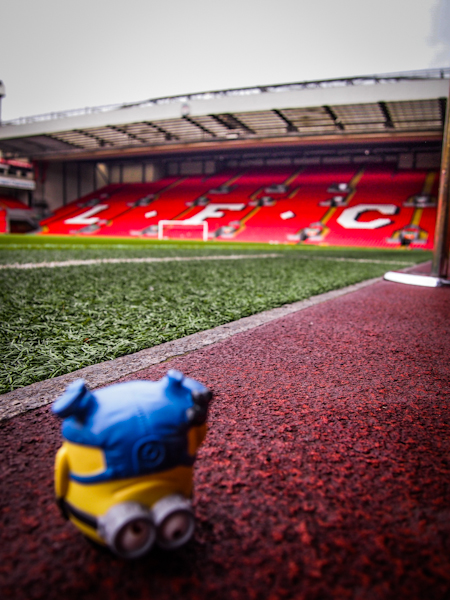 Last but not least, how could I depart Reds home ground without a picture of myself. 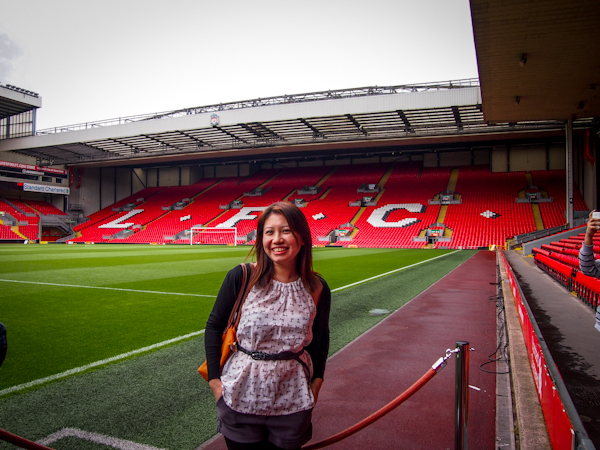 It was a fruitful afternoon getting to know more about the club that I have always been supporting. The two guides are very informative and certainly very passionate. Seeing everything right in front of me and knowing more on those behind the scenes is just amazing.

Although I have to admit that comparing museum, facilities, stadium capacity and even the compound, they are no where as grand as Manchester United or even Chelsea and Arsenal, probably due to funding issues but still, players did not let all these affect their performance on the field.

I left Anfield with rekindle love and passion for Liverpool FC and their performance in Premier League this season is definitely one of the better ones in years. I am pretty sure they will make it to the Champions League next season. 😀 The road to the end of the season will not be easy, but they will never walk alone.

Apart from checking out your favourite football clubs, what other clubs would you love or are worth checking out too?

Do NOT follow this link or you will be banned from the site!