Change is the only thing that is constant.

New roads were built, new MRT train stations and buildings sprout out every now and then orchestrating Singapore’s ever-changing landscape.

Land is scarce on this sunny island. Although land mass has increased by more than 20% since the 1960s through land reclamation to accommodate increasing population, it is never enough. In order to keep up with time, apart from land reclamation and constructing skyscrapers, there are also considerations which buildings to conserve and which buildings to demolish to redevelop the land.

Unfortunately, two unique neighbourhoods where many Singaporeans hold close to our hearts are set to relocate their residents by the end of the year (December 2016) and the flats will be demolished for future developments.

The four colourful blocks stood out distinctively in Bugis. They were built in 1977, under Housing Development Board (HDB), a statutory board that is in charge of all the public houses in Singapore. 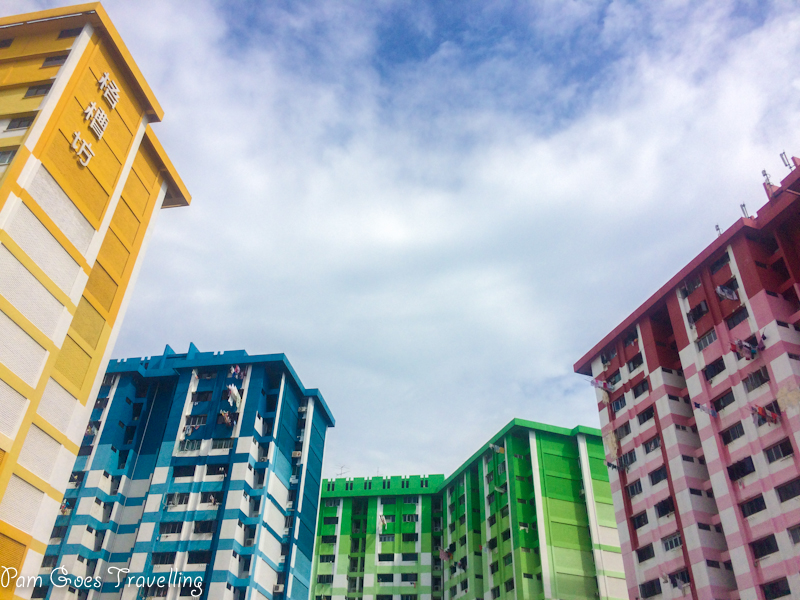 These four iconic blocks sit above a three stories retail shops for commercial purpose which caters to the everyday needs of the neighbourhood. From food stalls, supermarket, massage and beauty parlours to hardware shops, it is a one stop solution not just for the residents living above but also people who dropped by to pray at the popular Kwan Im Thong Hood Che temple nearby.

A place used to be full of life and energy has turned into a ghost town in a blink of an eye. With residents moving out to their new homes at Kallang Trivista flats and shop owners relocating to new shop fronts, Rocher Centre is now nothing more than an empty shell where residents took the chance to ‘start anew’, leaving behind fond memories and unwanted items. Gone are the animated conversations between neighbours, children’s’ laughter at the playground and spontaneous street soccer matches. No longer will you be able to see retirees taking afternoon naps on benches as the breeze carry their dreams away.

Even the last rental-free flea market, Sungei Road Thieves Market nearby is not spared either. The flea market is an iconic landmark in Bugis, for people who knew where are the hidden gems. The market earns its name because after World War II, people sold supplies left behind by the British military in this very place, then after, it was a heaven for thieves to sell off the goods they stole. Today, these items were not stolen goods, they are pre-loved goods that were once precious to their owners and also antiques and collector’s items. From those heavy bulky laptops, laser discs, books from my childhood days, beautifully carved porcelains and much more! It is a place where one uncovers treasures, slowly but surely.

After the flea market close down, I wonder what will happen to the people who comes here to sell their things. Where will they bring their goods and how will they continue their businesses?

Why the move? The move was deemed necessary to make way for North-South expressway to cope with increasing traffic and connect East Coast Parkway (ECP) to the north part of Singapore.

Dakota Crescent, one of the oldest estates in Singapore built in 1958 is the less famous sister of Tiong Bahru. Why so? Just like Tiong Bahru, Dakota Crescent has blocks of flats built by SIT (Singapore Improvement Trust). Interestingly, Dakota Crescent was named after an aircraft model, Dakota DC-3 which was a common sight in the area as Singapore’s first commercial airport, Kallang Airport was just around its vicinity.

However, unlike SIT flats in Tiong Bahru which were given conservation status, residents from the 17 blocks of flats ranging from 2 stories to 7 stories high had to relocate as URA (Urban Redevelopment Authority), the statutory board in charge of the land planning in Singapore wanted to further develop this piece of land.

Currently, these 17 blocks of flats are being rented to elderly or low-income needy people with two-third occupancy rate. Most elderly residents grew up in the neighbourhood. They had memories of playing alongside the gushing water in the river during heavy downpours which often leave the estate flooded. In the past, there were no blocks numbers written on the blocks and if you do not have a good sense of direction, it will sure be a challenge finding your way home. In fact, residents who live here are not just neighbours but are like families to one another. They can simply borrow condiments for cooking and trust one another with their house keys. This must be the kampong spirit that we are losing fast in our pigeon holes HDB flats.

These blocks are also one-of-its-kind, nowhere else in Singapore can you find flats with such unique architectures. These 17 blocks contain blocks with butterfly shaped brick houses if you look from an aerial view, some of the blocks have balconies extended from their house which made it so unique that Drama Box even made site-specific performances which received overwhelming responses from the public.

Lifts which provide convenience to the residents on higher floors and to ease the mobility for the older residents were so old that there is only one veteran technician with the required skill to fix them if they are spoil. There was even a case where he misplaced the one and only key which allow him access to the lifts that he had to search high and low for it just to get the lifts repaired.

What’s drawing young crowds to the area is Tian Kee, the provision shop turned cafe retaining the rustic interior and signboard which gives youngsters a glimpse of the past. I must add that the food is delicious too!

The iconic Dove Playground, one of the last few sand playground left in Singapore, designed by Mr Khor Ean Ghee is also going down history together with the estate. As a kid growing up with sandy playgrounds, there are only a handful of sand-filled playgrounds left, visiting one brought back memories. It reminded me how I hated it when adults put me on a swing and thinking that I am loving it but in fact, I was filled with fear that the chains will break and sliding down the old-school slides were more fun, faster and more slippery as compared to the PVC plastic ones in the newer ‘safer’ playgrounds. Although the sandy playgrounds from my childhood days are so call more dangerous, they toughened us up and leave us with fond memories.

Why the move? The plot of land sits on the prime zone and is making way for other estate renewal plans. Who knows 5 years down the road, it will be a plot of high-rise private condominiums, I won’t be surprised.

Singapore’s development is so rapid that changes are inevitable. We may not be able to save all heritages due to land scarcity, surely anyone Singaporean has memories at any corners of Singapore. What we need is to moderate, tread on the thin line, find a balance between moving forward and preserving our heritage. There is no perfect solution, just a matter of choices and decisions. We should still continue to fight for what we think is worth because they are what shaped us to be where we are today.