This time, I brought my sister with me. We grew up together, we fought, we gossiped, we teased each other endless and of course we love each other to death. Now that she has a family of her own, we hardly spend time together anymore. This is a good opportunity to bond with my sister once again!

Flight to Cebu but why Malapascua?

I was looking to get away from city life, a beach vacation where I can relax and chill. A friend recommended Tepanee Beach Resort at Malaspascua. I was sold at the first instant of beautiful photographs.

The first time I made a decision solely base on where a resort is located. That was how I started my journey to Malapascua island, 150km down south of Cebu. To remove all the hassle and save some time, we arranged for private transportation which had us on a car for 3.5 hours and 20 minutes of boat ride to get onto the island.

It certainly was a long journey to go for a short trip however I reckoned it was still worth the trip. Nevermind that it is a hot spot for divers for I am not one myself. I could do with a lying on beautiful beaches without an overcrowding of tourists.

Getting into/out of the island

I was naive enough to expect a proper pier where boats anchor right by the side and all I needed to do is to take a step into the boat. Oh boy, I was in for a surprise! I had to climb down some shoreline rocks onto a plank of wood to get onto the boat.

It was such a terrifying experience, coming from a person who is still recovering from a fractured ankle. I had to face the fear slipping off the rocks, hitting my head in the process,  lose my conscious and fall into the water (whichever comes first).  I could not  help but to imagine the worst kind of possible fate which awaited me.

Thank goodness for a bunch of brilliant people who guided me on which rocks to step down on and holding me while I face my fear face on. There was a point, I was so reluctant to go on any further, one of them offered to piggyback ride me onto the boat but I decided I was way too heavy and too scared for that. It was amazing how they got our luggages onto the boat with no hesitation just like walking across the road.

I joked with my sister that we should consider hiring a helicopter to send us back to Cebu on the day we had to return. #spoilbratalert

On the day of return, all my worries became non-existence, we were able to make our way from the sandy shore back to the road where the car is waiting for us as it was low tide.

Cost of the entire holiday

With everything included, I spent a grand total of SGD$426.25 with my breakdown below.

The amount spent for the whole trip was not split evenly between my sister and I. She paid for private airport transfer and most of accommodation while I paid for our insurance and the booking fee and fuel surcharged by Tigerair. Yes, even though I won a pair of return air tickets, I was subjected to other charges by them. We took turns to pick the tabs during the trip.

Flying through Cebu international airport cost 550PHP per head so do not squander all the Pesos away before reaching the airport!

That’s how we do it!

We spent our time hanging out by the beach, sitting on deck chairs, drinking and watching the beautiful sea till the sun set, drifting into sleep with the music of wave crashing onto the shore and swinging away in hammocks letting the mind take a break. Having breakfast by the private beach is one of most awesome feel-good meal in the world.

We lived the moment, there was no need to plan for anything. We ate when we felt hungry, sleep when it gets comfortable, basically just being carefree.
We also went snorkelling, chat up with a few other travellers and found ourselves in a restaurant-cum-bar place to chill and talk the nights away. 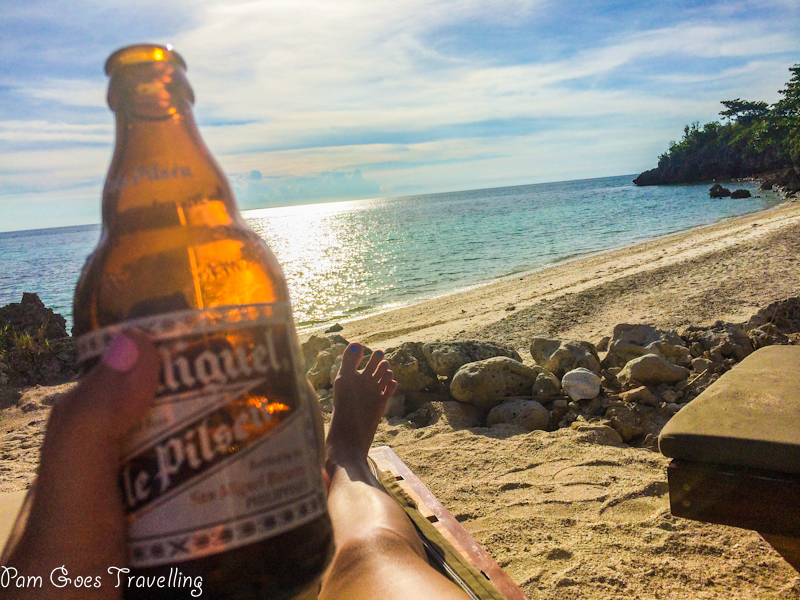 I took my first pillion ride on a motorcycle. I was pretty excited although we were kind of taken for a ride to somewhere disappointing but I am going to leave that for another post. Still, that was awesome having the wind blowing through my hair as I ride on.. yes, without helmets. Well, they are not strict about that sort of rules and motorcycle are their main transportation on the island.

We were close to nature, so close that we found a spider in our shower area on the first night. My sister freaked out telling me that was a spider as big as a $1 coin. I thought she was just being dramatic, only to realise when it was my turn to shower……. It was way bigger than a $1 coin and very active, running from the wall to the corner of the shower floor! I screamed much louder than my sister and made her watch over its every move while I showered. In the end, I splashed some water onto it resulting it to run right across the shower floor under the shower head before scrambling back to a corner. Since then, it went limped which I suspected it somehow got itself killed, probably by the water or something. The housekeeper had it removed the next morning when they were tidying up our room.

I did zero research, not planning anything in advance because I did not want to kill the spontaneity. On the first evening, we attempted to venture out of the resort to hunt for dinner only to find ourselves in total darkness. There were no street lamps so it looked a little creepy since we were unfamiliar with the environment. After making some turns, we found ourselves walking into a village where there were a few local shops but there was no eating place. In the end, we retreated back to our resort and had an authentic Italian dinner prepared by Italian chef at Amihan’s restaurant, the restaurant opened by the resort.

Here are the snippets of our days in Malaspascua. This is my first attempt at making travel videos so pardon the quality and skill.

It was certainly a well-deserved break away from the city life. I can look at the beautiful and calm sea everyday and not get bored to it. Although the sand in Malaspascua was not one of the finest I have seen but it still retained a certain local identity and beauty without an over influx of tourists.

Malapascua is just my first taste of Philippines. I know I will taste more of this country in time to come.

Have you been to Malapascua? Which other islands would you recommend in Philippines for a beach getaway?