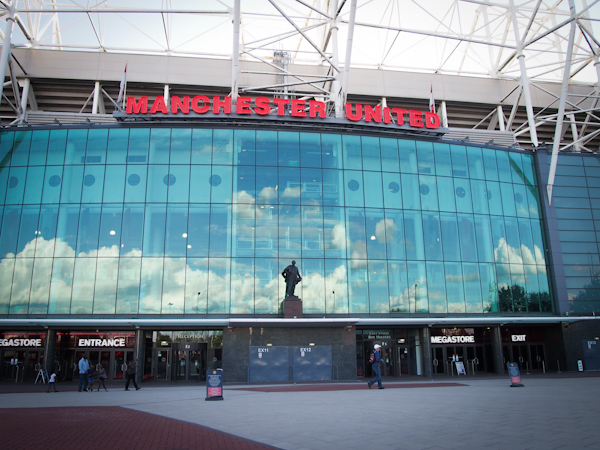 Being a Liverpool fan, how did I ended up at Manchester United homeground?

Manchester United used to be my 2nd most favourite team after Liverpool, how it that so given that they are arch rivals? Blame it on the hottie, David Beckham I say (I am weak against hotties like him!

). I thought they are still my second favourite team in the Premier League until their recent game against Sunderland I realised that I cheered for Sunderland and jeered when Manchester United scored during the match. Not that I am a Sunderland fan but you know…

Another reason to visit Old Trafford is because I was advise to do a comparison of stadium condition against my favourite team so without hesitant I picked Manchester United.

Their museum and stadium tours are available all year round.

I would recommend to book the ticket to for the museum and stadium tour in advance because they have different time slots for the stadium tour and each time slot only allow certain number of people. I booked mine via my hostel at £13 for student ticket. Remember to arrive an hour earlier so that you have enough time to walk around the museum before the stadium tour starts.

Manchester United is a 10 minutes walk from Old Trafford metro station, the easiest way to get there is via their metrolink. Old Trafford station is along Altrincham line, so since I stayed in city centre, I took the metro from Piccadilly Gardens, a straight train right to the station. A return trip on the metro cost £3.

On the day I went, there was a big cricket game going on in another stadium which was just beside Old Trafford station, it was a game between England and Australia. Despite the tall gates and walls that hinder me from catching the action inside, I could almost feel the excitement from the atmosphere inside with the loud cheering roars. There were roadblocks outside the stadium with policemen patrolling along the stretch to prevent any car from driving down the lane.

As I walked along the empty road, I overheard a policeman who stopped a father and son because the son who is probably my age group was holding on to his iPad snapping away. He advised the son to put his iPad in his bag because it is a high robbery crime area. Upon eavesdropping that, I grabbed my mobile phone (which doubled as my navigator) tighter on my hands as I walked and heighten my awareness level.

Safety in numbers, I approached them and ask if I could join them to walk to the football club. I learnt that they came from Thailand and that was how I found someone to take a jump out of me at the entrance of the club. 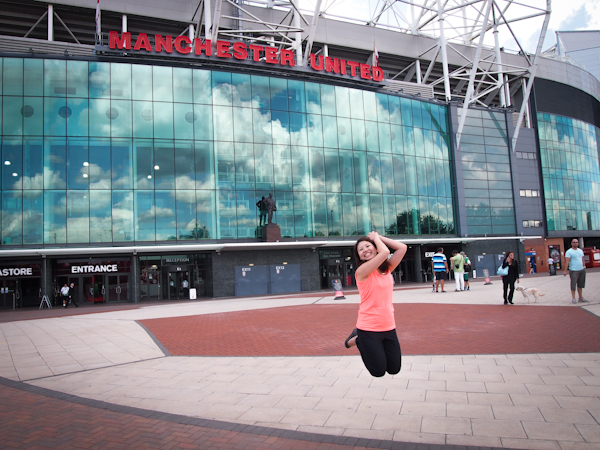 Once I was issued a ticket that came with a complimentary Manchester United lanyard, I was ready to explore the museum. 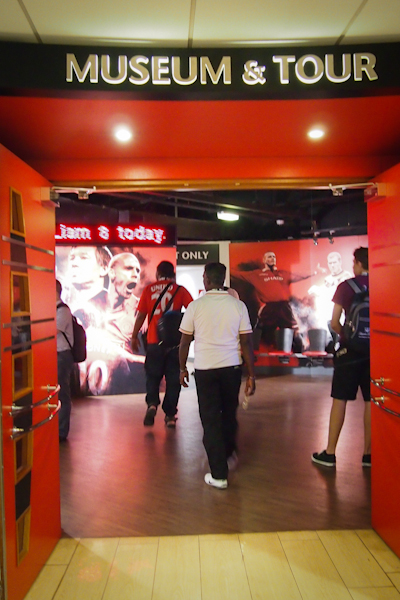 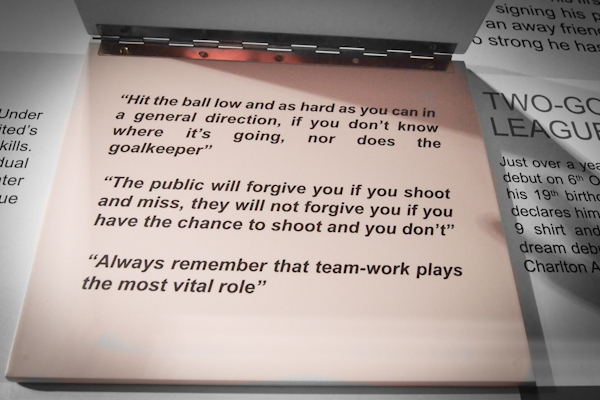 Paying tribute to the victims and survivors of Munich air disaster on 6 February 1958. 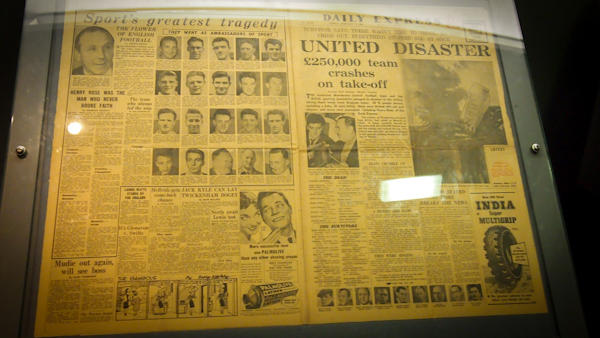 The disaster happened when the football team was on their way back from a European Cup match in now, Serbia when the plane had to stopover at Munich for refuelling. The plane skidded off the runway as it hit the slush on its third attempt to take off. 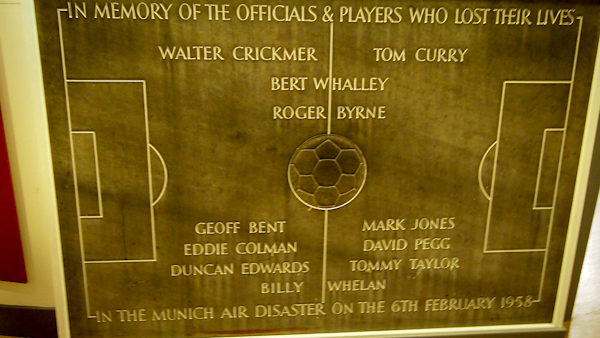 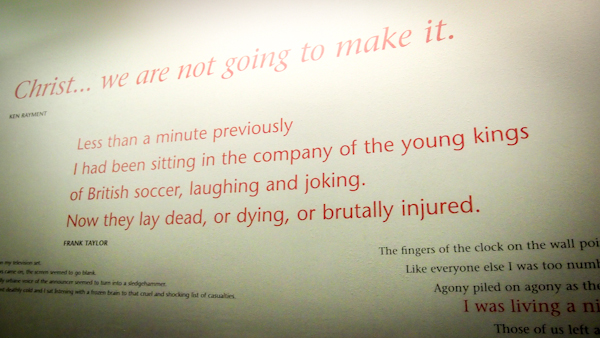 It was the saddest day of Manchester United history.

Turning to the happier stuff, they have a wall with all the names of players who played for the club before. 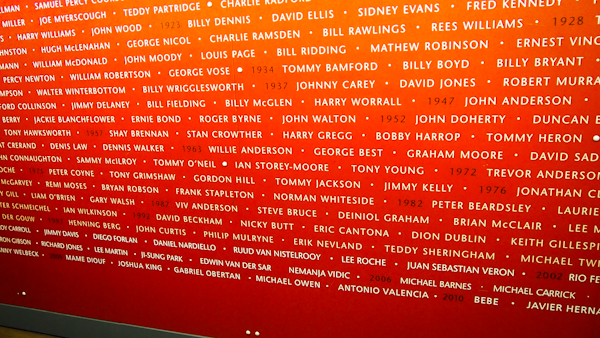 It was Matt Busby who had a vision for this football club, to talent scout for the young players and train them into professional world class players. 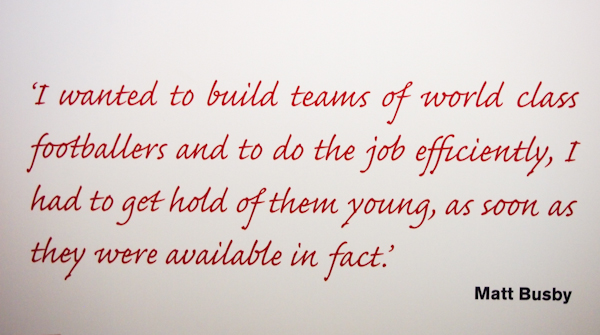 So here are the (used to be) young and talented players of those days.  Time and tide wait for no man. All of the boys have matured into men. Can you recognise them? Even Alex Fergurson looked so youthful back then. 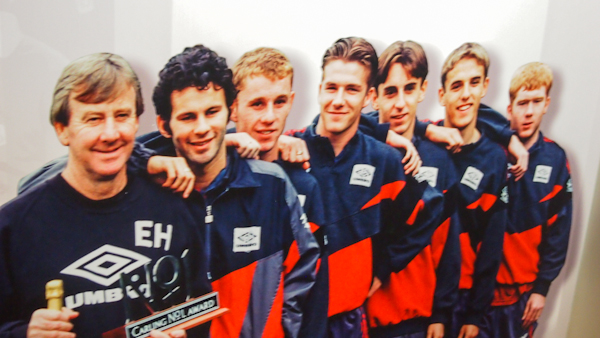 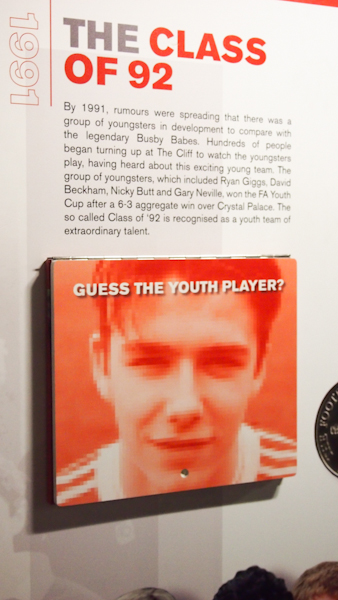 There is this area whereby they showcas all the trophies they won. When you turn 360 degrees, you can see trophies everywhere. 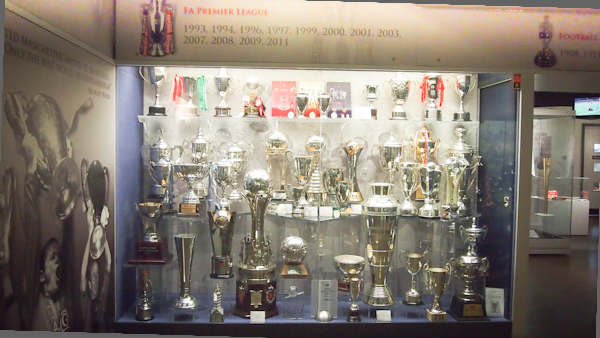 Sitting at the middle of the area is a super huge one, Barclays Under 21 Premier League Trophy. 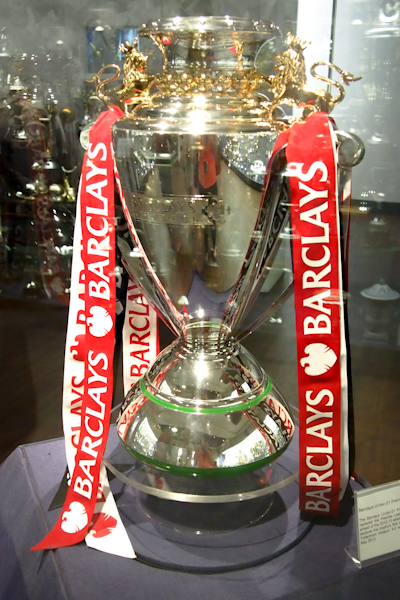 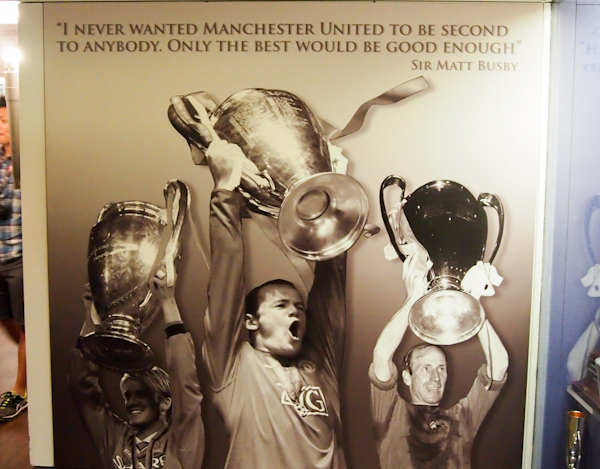 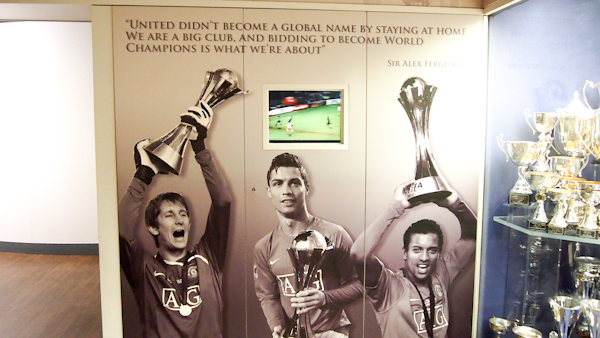 I bet David Moyes is feeling all the pressure managing the champion team.

A signed England jersey during the game against Greece on 6 October 2001 by David Beckham. 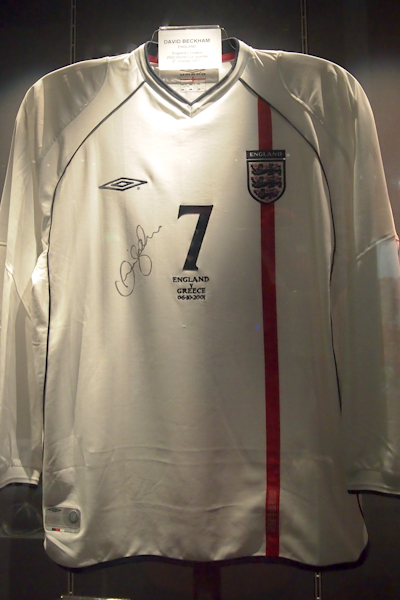 When my allocated time was being called, I proceed to the meeting area where we met the informative tour guide who brought us into the stadium.

We were seated at Sir Alex Fergurson stand overlooking the well maintained field. It was very spectacular indeed. It felt as though I went into another parallel universe, I could faintly hear fans cheering with pride and unity while a big match is being played on the field. The feeling was AWESOME.

As we were walking, I spotted a snack bar which opens during match day for hungry fans to grab a bite.

I was surprise to finding a sports betting kiosk in a stadium. It seems a little inappropriate, I feel like they are promoting sports as a form of gambling rather than for the love of the sports and the team you support. If you are a true supporter of your team, should you be supporting it with your money as well? It just felt wrong to me.

Another angle of the field with me to prove that I was there!

We were being brought to their interview room where post match reviews happen. Unfortunately no photography were allowed because they have a professional photographer who will take photograph of you with wax figurine of Alex Ferguson, for a fee of course. I wonder how long have they been cashing on the wax figurine and will they be creating one for David Moyes?

Next, we were brought to home team’s changing room. The jerseys that were hung around the room are replicas of their actual ones.

There is this adorable little boy who is a huge fan of Giggs. He sat contentedly under Gigg’s jersey the whole time. I had to asked him to excuse himself so that I was able to take a photo.

Ryan Giggs for he is still THE MAN!

I have absolute respect for this man. He is the record holder for being the longest serving player in Manchester United with more than 900 appearances. He has been loyal to the club in his whole entire career. Very likely to hang up his boots after this season however I hope to see him continue making his contribution using the experience he has accumulated all these years to coach the new players in club. Perhaps one day, to see him successfully managing the club, that would be legendary.

They have a tactics board where strategies are discussed before or during half time of the matches.

An essential in the changing room. Keep the the image in check before meeting the supporters and check for that air of confidence hopefully to intimidate the away team.

It has been 10 years since the players walked out of the field using this tunnel. Now, they use another exit by the corner.

Walking out of this tunnel will bring you to the area where the home and away teams sit facing Sir Alex Ferguson stand which was the beginning of the tour.

To conclude, this museum and stadium are very impressive, Well, coming from a club that is rank the second richest football club in 2013 ranking, surely they have more budget to keep the stadium well maintained. This is definitely the highlight of my visit to Manchester. 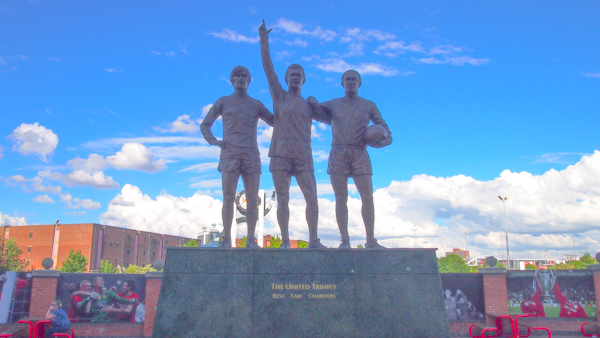 Even though you may not be a Manchester United fan, it is still well-worth to pay a visit to this football club.