I was due for yet another solo trip for the last one was 16 months ago to Portugal and Spain. It was not difficult to pick Sri Lanka as the choice of my next solo adventure.

The first thing that comes to the mind of true blue Singaporeans at the mention of Sri Lanka is their crabs. How can I blame them? They are the main star of our famous signature chilli crab dish. Of course, Sri Lanka is more than just their crabs.

I have always dreamed of going on a safari. Africa is too far and expensive, a visit to Sri Lanka for their safari makes better sense (and cents) for a first timer. Furthermore, Sri Lanka is only 3.5 hours flight time away from Singapore.

I concurred. It is a country with EVERYTHING. By everything, I mean – gorgeous beaches, trails to hike, ancient cities, national parks, and many UNESCO sites. I poured through guide books and the Internet, picked my poisons and I was ready to go.

I booked my trip with Air Asia with a layover in Kuala Lumpur because it was cheaper than flying direct and the arrival time was better.

My plan was to take the last flight out from Singapore to Kuala Lumpur. Stay a night at KLIA capsule hotel then take the first flight out to Colombo, arriving in Bandaranaike International Airport at 9.30am. After which I intended to travel by train and reach Galle by late afternoon.

Travelling would not be an adventure if everything goes as planned.

Received an email from Air Asia 27 hours before I took off. My flight from Kuala Lumpur to Colombo was rescheduled to depart that afternoon instead. With my original plan threw off course, I scrambled to change my first flight and look for alternatives to reach Galle on the same day.

While waiting at the boarding gate for the connecting flight, I was getting impatient as the plane was further delayed by an hour. I dislike arriving at an unfamiliar place when the sky is dark and I worried if buses and tuk-tuks still run at those hours late into the night.

When I arrived, the sun was already setting but luckily my worries were uncalled for. There were still buses running between Colombo and Galle and I hopped onto one.

Four hours later, I arrived in Galle and immediately got onto a tuk-tuk which took me into the fort. Streets were empty and dark, it is almost like a dead town. The loud revving sound from the tuk-tuk announced my arrival into the city and I wondered how many dreams I have disrupted.

When the tuk-tuk pulled up at the hostel, the door was shut. I knocked with all my might, afraid that I will have to sleep on the street that night.

When the staff opened the door, I heaved a huge sigh of relief. That ended my 15 hours of journey, from Singapore to Galle. I made it.

I spent close to SGD$1,250 for the entire trip. I splurged on a night of glamping (glamorous camping) with safari game drives and meals inclusive which drove my expenses up substantially.
In addition, I pampered myself with a good 1.5 hours of massage because the sweltering heat and the 15 hours journey took a toll on my body.

Apart from the glamping, everything else such as bus rides and food were rather affordable. Entrance fee to certain attractions can be a little costly so I had to make decisions.

1) Little Adams Peak – Everyone, including Lonely Planet mention that Little Adams Peak is a fairly easy hike and I was naive enough to believe. What I imagined for an easy hike does not include using all fours to climb up like a Spiderman nor getting down on my butt but I did anyway; to climb to the second peak.

Maybe it is the easiest hike in Ella but I am a well-oiled city girl. Someone who only operates on flat ground or maybe it could be due to my short stature. Despite the ‘toughness’ for a dainty me, the hike pushed me out of my element, the view was rewarding, making the climb worthwhile. The surreal moment, a moment of being present. That was enough to make my heart swell.

2) Scenic train ride – Train from Ella to Kandy is one of Asia’s most scenic train ride, so they say. The seven hours ride was bearable, in fact, enjoyable with the ever-changing enchanting landscape. I was grinning ear to ear as I stared out of the window with an instant sense of gratitude just to be there. 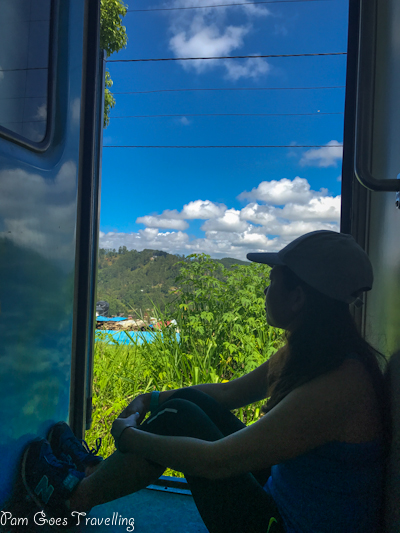 The thrill of sitting by the doorway, letting my feet hang out. I let the kid in me came out to enjoy the moment. That was one of the best feelings ever. 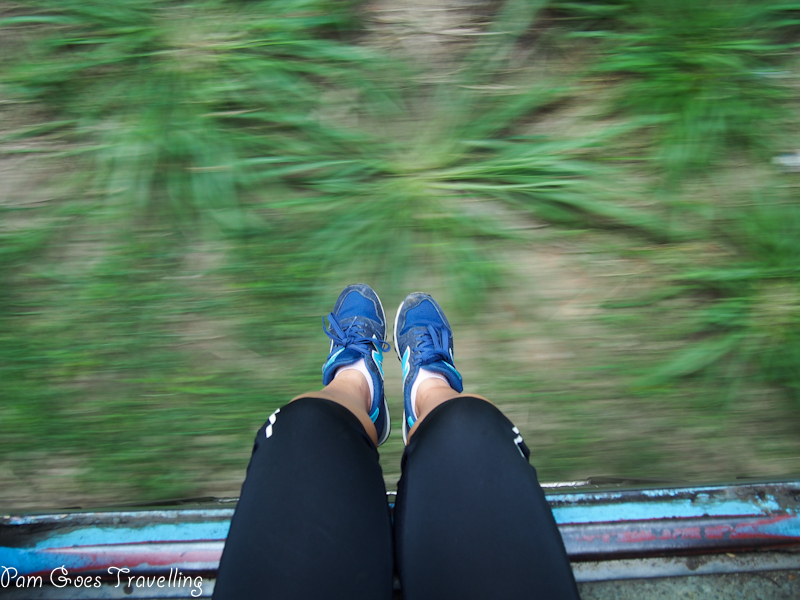 Hangovers. I went a little overboard with the drinking for the two nights I was in Ella. It resulted in me waking up the next morning with an uneasy stomach. Serve me right and I instantly regretted the next morning. The regretful feeling did not last long because this time I was well-prepared. Nothing a little remedy cannot fix.

8 days are insufficient to explore the whole of Sri Lanka but I was able to see what I wanted to see.

Galle – Inside the fort, everything is calm and organise. On the other hand, what is outside the Fort is the complete opposite. It is loud, rowdy, chaotic and lively, in true Sri-Lankan style. Colonial architectures inside the fort are beautiful. Climbing onto the fort gives a perfect view sunrises and sunsets. I mean, Galle Fort is beautiful but it did not impress me because it is very touristic. Products and services in the fort are targeting tourists. Getting a massage in Galle Fort could easily cost 40-60% higher than what I paid for in Unawatuna, a 10 minutes tuk-tuk ride from Galle. Do not get me wrong, I could still recommend Galle. Just a word of caution to manage personal expectation for it is a tourist zone.

Yala National Park – My first taste of safari. The highlight of Yala National Park is the leopards which I, unfortunately, saw none. Apart from leopards, there are many other animals in the safari. I saw different species of birds, deer, crocodiles, monkeys and more! It was a humbling experience. Each time when we drew close to those animals so I could perfect my shot, I felt like a rude intruder poking into their lives, because I was messing in their territory.

Ella – A small little town located up in the mountainous area charmed me with its natural beauty. I ate my best Sri Lankan meal and met some awesome travellers. It was easy to bump into other travellers more than once because of the small community and I like that. The hostel I stayed in was in some hideaway corner away from the town centre, it was kind of cool except that I was assigned to a ‘jail cell’ with no windows with bad ventilation but hey, I survived! I was able to let my guards down and take in whatever nature has to offer. This has got to be one of my favourite place in Sri Lanka.

Kandy – Going to Kandy from Ella was a rude shock. I got used to the sleepy town and suddenly getting into a big city was overwhelming for my senses. It took me quite a while to adapt. I did a ‘hostel run’ with a fellow traveller and checked ourselves into a decent, if not awesome USD$10 hostel. That relief look on my face when I realised it included air-conditioning, clean linen, locker that comes with a lock, clean bathroom, free breakfast and amazing roommates, that was incredible! What was I thinking booking that lousy USD$8 (to put it simply), foreign worker dormitory inspired hostel?

Sri Lanka is not difficult to travel around but as a female solo traveller, it can be a little frustrating. The men, particularly in Galle and Kandy were forthcoming. They were not aggressive but they appeared to be too friendly for my comfort. To counter that, I put up an invisible wall. I made up fictional characters and stories to protect myself from further questions. In any case, I never felt unsafe. I did not have the heart to explain why am I single or travelling by myself in a pro-marriage society and to deter further interest in my life.

I also came up with a brilliant idea to make money on the road! Imagine if I were to charge people for taking photos wih me or of me, I will either get rich or at the very least, stop people from doing so. It is only fair since the locals expected us to pay to take photos of them or their possessions. ????

Travelling in Sri Lanka, all you need is a little patience, trust and a sense of adventure.

Have you been to Sri Lanka and what do you think of the country or would you like to visit it one day if you haven’t been? Share with me!