After some time in Saigon, I was ready to leave the hustle and bustle behind to move down south to Mekong Delta, also known as the rice bowl of Vietnam.

I booked myself a homestay on An Binh island which was just a ten minutes ferry ride from Vinh Long province. Fortunately, owner of the homestay had a friend who was making his way from Saigon to Vinh Long so he arranged for his friend to pick me up at my hostel sending me direct to Vinh Long ferry terminal. I heard/ read many stories on how transports and people in South East Asia (except Singapore but me) never run on time. Much to my surprised, the driver appeared 5 minutes before 8am (agreed time) with my name written on a board.

The car begin to pick up speed and honks became fainter as we moved away from the city. My driver was a man in his fifties who could only speak and understand basic English hence he did not attempt to strike conversations with me. He filled the empty void with upbeat instrumental music which was pleasing to my ears. I enjoyed the luxurious peace as I shuffled between reading on my Kindle and taking a snooze with the rhythmic motion on the road.

Arrived at Vinh Long after two and a half hours, I had to cross a road before reaching the ferry terminal. For some strange reason, I twisted my right ankle as I stepped down from the pavement onto the road. Having my freshly recovered fractured left ankle, a similar dreadful feeling came rushing in and I was worried for a good 3 minutes that my whole trip would be ruin by a freak accident. Upon seeing what happened, my driver helped me across the road to the bench and accompanied me until my foot recover from the soreness and left only when I boarded the ferry along with other passengers, motorcycles and cars. 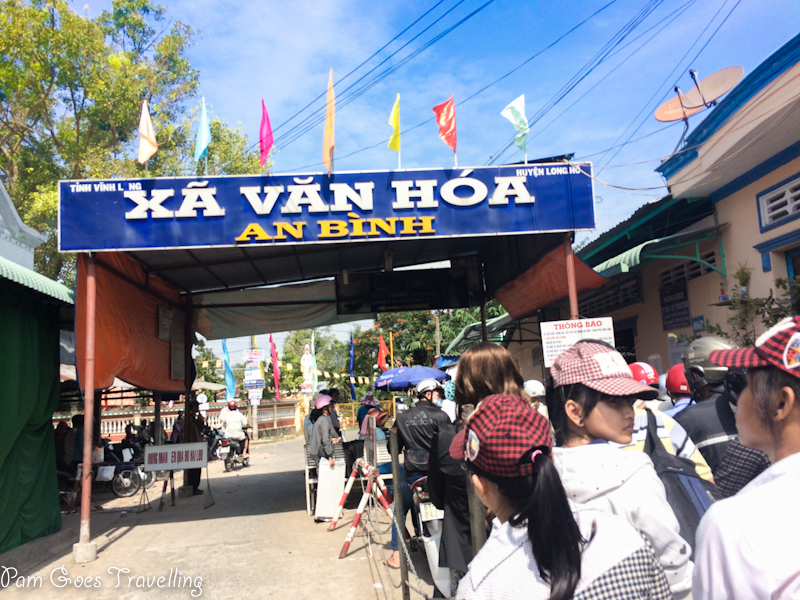 I was easily identified as the only foreigner who disembarked the ferry with my t-shirt and shorts combination carrying a backpack and my shades to keep the sun glares away. I was whisked off in a motorbike to the homestay in the rural island and the ride had me pumped with adrenaline. Not because he was going very fast but rather, a sense of adventure to the unknown. Arrived at the island, I could only place my trust in the guy who came to pick me up in the motorbike and that was the only thing I could do.

Phuong Thao Homestay was where I spent a night in, a paradise while I detox from chaotic city life. It was a rustic home built with wood and thatched roofs. It has a huge dining area catering to guests as well as day visitors who drop by to have lunch as part of their tour. Rooms are partition from a large communal area with thin plank of wood between and each room has has bare minimum of a inconspicuous double bed covered with mosquito net, an wooden chair and switches for the fluorescent lamp and fan. 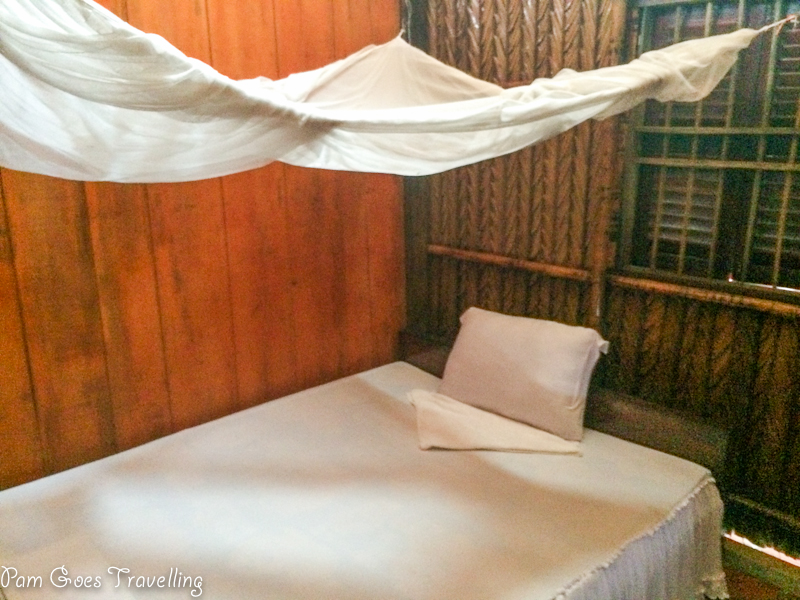 Hammocks  hang from pillars to pillars which I was often found swinging in as I read, closed my eye for a little nap enjoying the tranquility or just simply stared into the garden of roosters and dogs. As simple as the place is, it was relieving to find modern-day toilets equip with heater for a good shower. 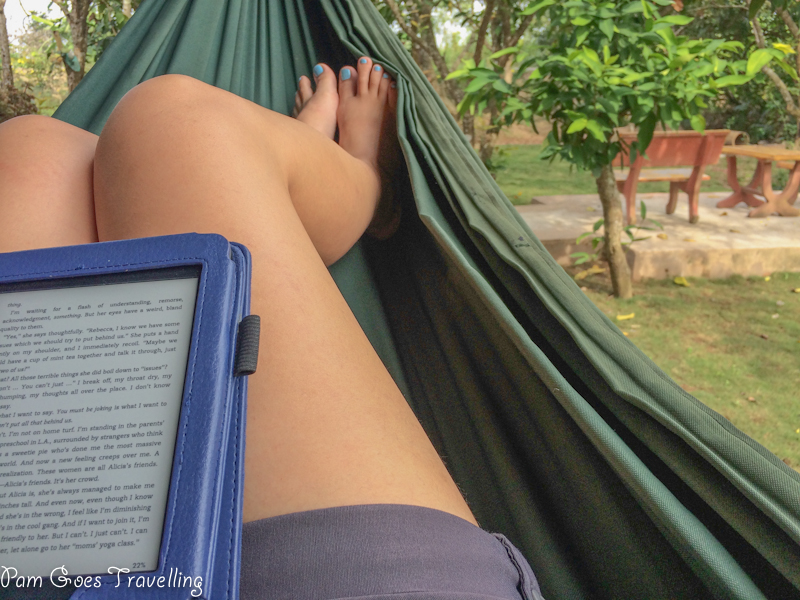 I made friend with a German girl who arrived a little later than me and we decided to explore the island on bicycle provided by the homestay in the late afternoon. I was glad to have a companion because even though An Binh is a small island, I can trust myself to get lost. As we rode around the island, kids waved at us enthusiastically and shouted hellos while the adults tend to be a little more reserved and smiled at us when we past their houses. It was nice to feel welcome on an island filled with friendly locals.

By the time dinner was served, the sky had already turned dark and the climate became cooler, like being in an air-condition room with mosquitoes hanging around, ready to suck blood at every opportunity. Daniela, the German girl and I agreed to have our dinner together because the homestay offered set meals for a minimum of 2 person and it made more sense to share with someone in order to sample more authentic local dishes. Dined out in the dining area surrounded by nature, we had Mekong’s speciality, elephant ear fish where we wrapped its meat with some vegetable and sauces in a rice paper before consuming. Honestly, the wrapping part was interesting but I thought the taste of the fish was just like… a fish. 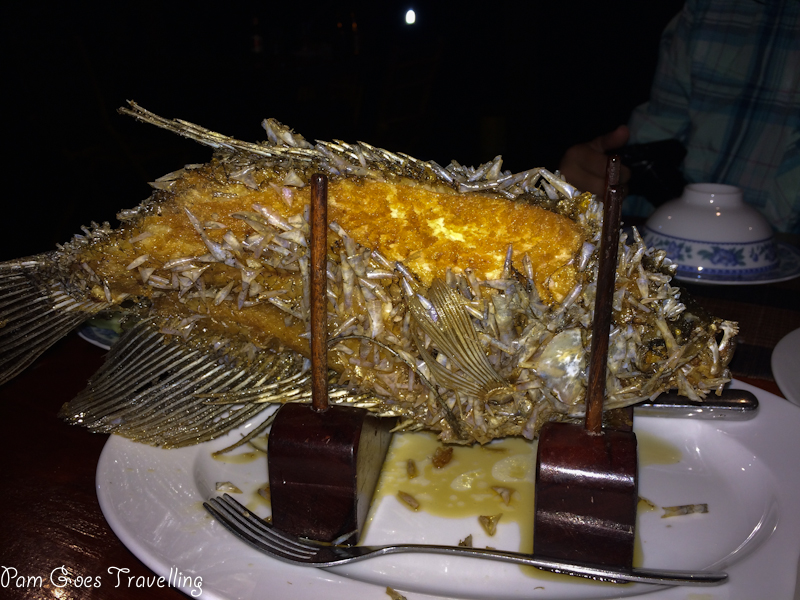 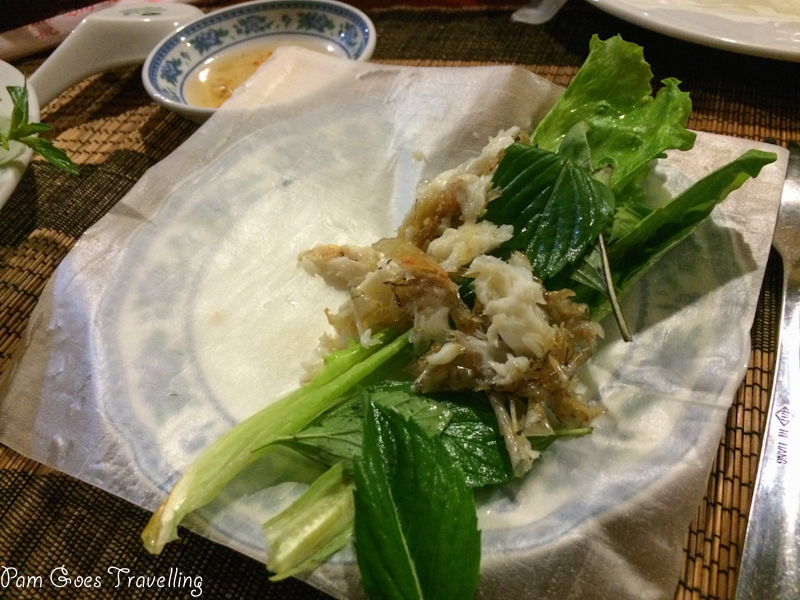 Mr Phu, the friendly owner of Phuong Thao homestay is a local with good command of English. After dinner, he came to interact with all his guests, making small talks, giving suggestions and helping us to plan the logistic part of our trips and he has an active toddler son ain’t shy of strangers.

After dinner, I settled in one of the many hammocks, enjoying the serenity of the place, listening to the loud cricket sound while I marvelled how beautiful life was to be able to experience all of the those.

When I returned to my room, I fell asleep almost immediately on the surprisingly comfortable foam mattress that it felt like the only luxury item in the room with a mosquito net to ensure I am able to get an itch-free night of sleep. I woke up promptly at 5.30am to the sound of nature, crickets chirping, lizards calling, roosters crowing and dogs barking, melodic and refreshing to a city girl like me.

Gathered at six in the morning I was ready to begin the morning market tour. The sky begin to brighten up as the boat sailed off from a river nearby to Cai Be, nearest floating market from An Binh while we had our simple breakfast packed by Mr Phu’s wife on board. 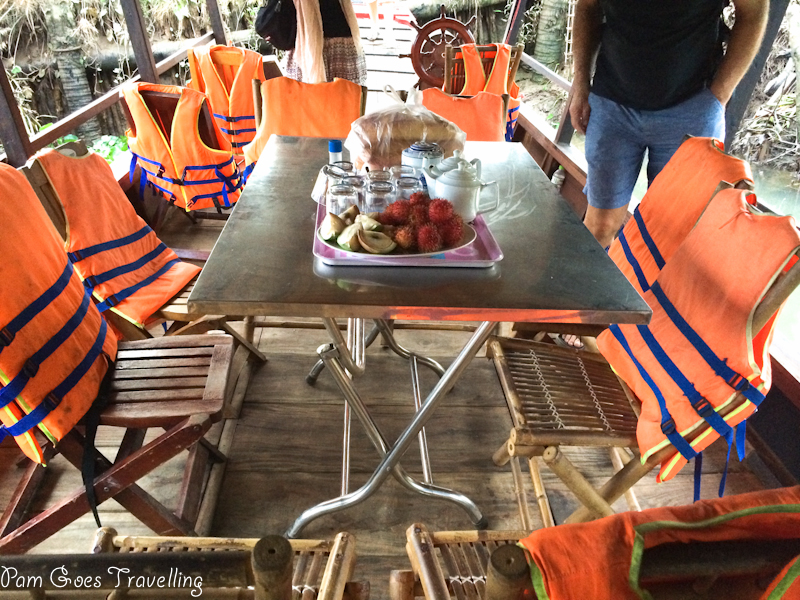 I fascinated myself watching how locals trade in Cai Be floating market. Usually sellers will hang the item that they are selling on an extended pole so that buyers from other boats will be able to see from afar before coming nearer to make the deal. I pondered if the locals have perfect eyesight that they are able to identify the products they are looking for from afar because I needed to squint my eyes and sometimes still not able to figure out what products the sellers are selling.

Moving along Cai Be floating market, the boatman anchored near a land market. The visit to the land market was truly a memorable and eye-opening experience. It reminded me of my younger days where I tagged along my mum to the wet market near my house. Except that the ones in Singapore have no live animals tied up staring innocently at me as if asking me to save them from their impending death and meat were kept fresh in display freezers rather than laying out in the open.

I filled with curiosity as I watched how frogs had their hearts dug out alive and skin peeled before being thrown onto big metal places according to their sizes. Some were doing their final leaps on the metal plate, as if fighting for that last bit of survival. I wondered if their pulses were still going or was it some sort of reflex. Frog meat is part of my diet and to be able to face up to the truth from behind-the-scenes was eye-opening however that did not deter me from eating them again.

Ducks were killed with slits in their throat to end their sufferings fast and bloods were dripped dry onto bowls, probably for making other delicacies then they were dipped into hot water for easier defeathering. This is something a city girl like me will never get to see because all I see are packed ones sitting on the shelves of supermarkets. 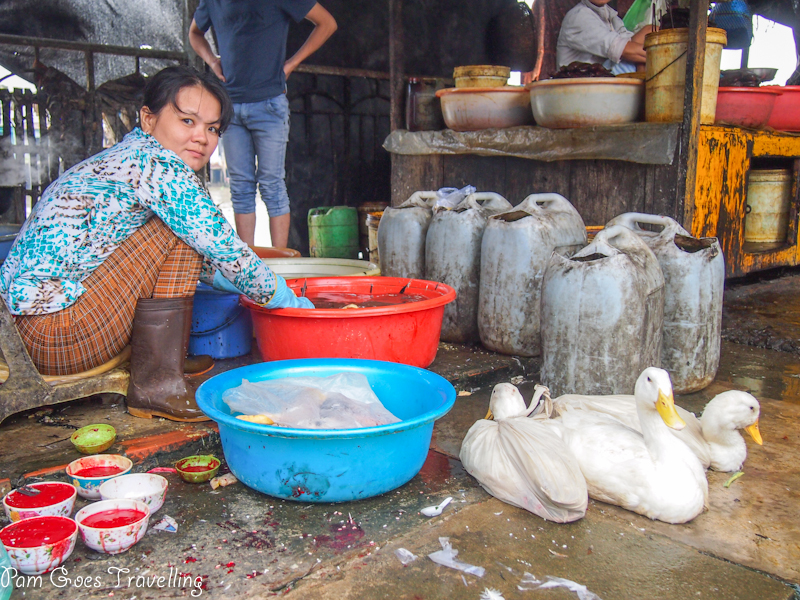 After visit to their local markets, the other half of tour was more touristy. Visited a local bee farm, factories which make coconut candies, crispy rice and rice paper and souvenir shops for some shopping. Ended the tour with a almost mandatory in Mekong Delta, sitting single file of four in a sampan while a Vietnamese woman row along the river.

The morning tour ended at about 10am and it was time to pack my bag, savoured the last bit of peaceful nature before I bade farewell to my new friends and travelled on to my next destination, Can Tho.

Have you ever been to a homestay in Mekong and do you love the rural part of Vietnam?