On Sunday morning, Susan and I got ready for our day trip to Macau from Hong Kong. Since both us have not been there, we merely googled where to catch the ferry while having our breakfast. We planned to get into Macau by noon so that we were be able to do more sightseeing then return that night. However neither of us would have expect what came next.

There are 2 ferry terminals, one located at Central and the other in Tsim Sha Tsui. As we were in Austin/ Jordan area, it was more sensible to make our way to the terminal at Tsim Sha Tsui by foot. Upon reaching Star Ferry Terminal, we were told that China Ferry Terminal is where we should be and is about 700m down the stretch of road.

Nearing China Ferry Terminal, we realised it was only 10 minutes walk away from our apartment and we spent the whole time taking such a long detour. Since it was so near our apartment we decided to head back to change our choice of clothes as the weather turned a little warmer.

By the time we arrived at China Ferry Terminal, it was already past noon. There were a few booths selling tickets to Macau. At the same time, there were people approaching us wanting to sell us tickets. We compared the prices at a few booths and came to the conclusion that they are under one operator and prices are pretty similar. We bought our same day return trip with Turbo Jet at HKD$340 each.

Our boarding time was at 1pm and Macau is only an hour ferry ride away from Hong Kong.

Once we stepped out of immigration custom, we were overwhelmed by the number of touts offering city tours. We dodged into Visitor Information Centre to grab a map, planned our itinerary with their friendly customer service within minutes and set off for the day.

The public bus we took brought us to to Senado Square. It was extremely crowded with tourists, it could be because it is a weekend and everyone is out to play!

We depleted our breakfast calories with all the walking down the street of Tsim Sha Tsui that we were starving by the time we reached so it was time to hunt for food!

While walking along the street, we discovered a european style back alley.

Perhaps we walked in the wrong direction, we did not seems to pass by any restaurants or cafes that enable us to sit without feeling the crowd. We ended up buying a bowl of Sze Chuan spicy tapioca noodles from a random street stall at one of the back alley to share. With cloudy weather and hungry stomachs, it was a comfort food despite having to stand around the back alley looking so pathetic while eating.

We finished our lunch with a cup of fruit juice and a chocolate crepe that was absolutely delicious!

First stop was to find the famous UNESCO site, Ruins of St. Paul’s.

Yes, we braved through the massive crowd, weaving in and out just to get to the popular site where many Asian films have shot scenes with the famous facade as their backdrop. It sure looked romantic, a place where you can just take your time to stroll and embrace the moment… but ladies and gentlemen, reality smacked right between our eyes. 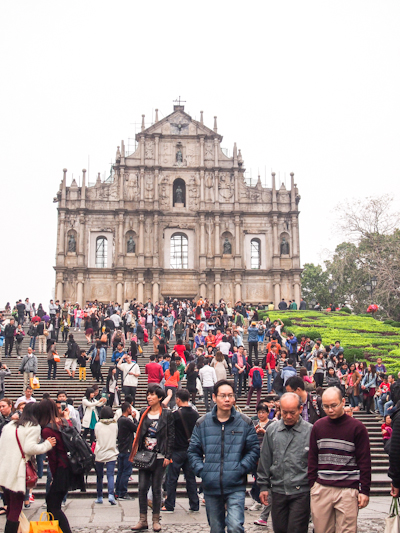 It is a famous site for some reason,  obviously everyone wanted to bring home some memories of the place. We were kind of put off by the crowd because there was no way for good photography and we could only settle for this.

What was left in today’s Mater Dei which was built in 16th century was only the southern stone facade.

We decided that Cathedral of St Paul is far too touristy and there were lack of information on the historical site so we left and explore other parts of the UNESCO instead.

We found a fortress used in the olden days.

Before we left, I captured  a beautiful photo with a romantic illusion. Now we see the difference between finding the right angle to shot the beauty and the reality of the site. 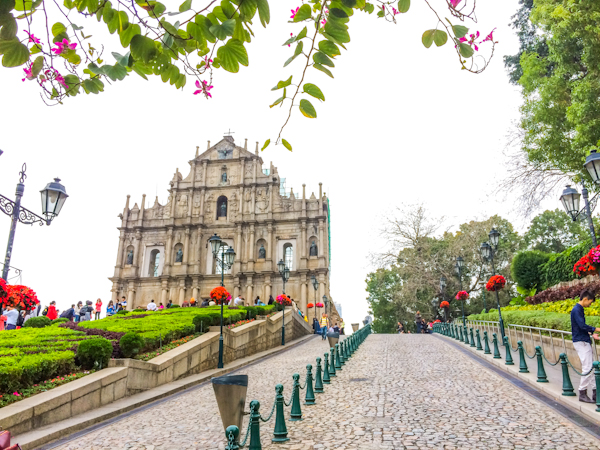 Susan needed a pair of new shoes before we could move on. After plenty of indecisive moments, she decided on a pair of Adidas black sneakers with gold polkta dots. Pretty chic I say. 🙂 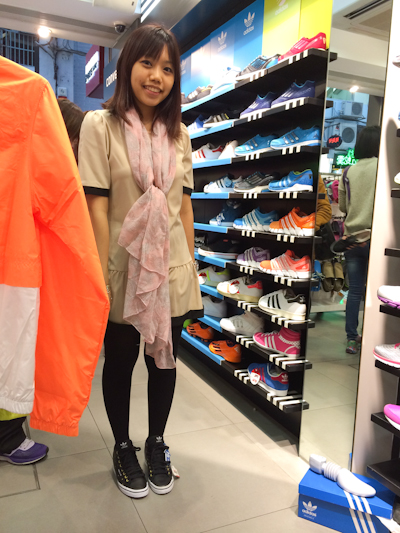 City of Dreams, it is, when you see all the fanciful LED lights from those casinos. Macau is also known as the Las Vegas of Asia, hard not to it definitely live up to its name!
Never short of casinos, too spoiled for choices for gamblers who want to try their luck.

No, we did not went to Macau with an aim to gamble so we walked around a couple of casinos. Eventually we ended up at Venetian which has plenty to offer to non-gamblers.

We were greeted by old victorian style interior design that almost looked like they transported us to Europe instantly.

San Luca canal, A replica of Grand Canal in Vernice, Italy. Complete with the blue sky, windows and gondola for a wholesome experience.

It is also a shopping mall, in its panorama view.

As it was getting late, we took the shuttle service from one of the casinos back to the ferry terminal, ready to catch our 9.30pm ferry back to Tsim Sha Tsui.

We happily assumed that we are alloed to board the ferry with our voucher but we were denied entry during the check before we could get into the immigration custom line. We were told that we need to use that to exchange for ferry tickets instead.

When we approached the counter to get our tickets, the last ferry at 9.30pm to Tsim Sha Tsui was sold out! Earliest ferry to get back to Hong Kong was at 12.15am which will take us to Central which is further away from our apartment which mean we had close to 4 hours to waste at the terminal and instead of walking back to our apartment, we had to take a cab because there will be no public transport and it actually cost more to get a taxi across the sea.

Too hungry to even brood over it and too tired to explore more of Macau, we settled for the only Chinese eating place in the terminal.

We were looking forward to some good food to cheer us up but instead, we experienced terrible service from their service crews and we had the worst plate of shrimp roe noodles ever in our whole life which was waived from the bill.
At least now we know, when in doubt, always trust McDonalds!

By the time we got back to our apartment, we were deadbeat and although the trip to Macau was not as smooth as what we were expecting, the optimistic in me says, for every miscalculated move is an experience, a lesson and adventure.

Macau has a heavy influences of Portugal which can be evidently found in their architecture, the mixed of the East and West made Macau what is it today. Apart from the famous UNESCO site and visiting the casinos, what other fun are there in Macau? Share with me!

Essential tip: Although Macau uses their own currency, they accept Hong Kong Dollar (HKD) as well. The rate is 1:1. However do take note that they may return you your change in Macau Pataca. Macau Pataca is not accepted in Hong Kong.