For today’s post, let’s take a walk down history. A civil war fought in Korea between 1950 – 1953, a war where both sides took on a different ideology.

To understand how this civil war got started, let’s have a look at pre-Korean war time.

During ancient times, Korea was one country that was ruled under Korean empires. The country went through many attacks by foreign countries but they managed to survived it all. However it fell into the hands of Japanese in 1910 and was under their ruling until 15 August 1945 as part of Potsdam Declaration (unconditioned surrender) issued by United States, Great Britain and then-National Government led by Chiang Kai-Shek for Korea to regain their freedom and independence.

On 9 August 1945, Soviet had entered Korea from the north and occupied Korea at 38th parallel where the Demilitarised Zone (DMZ) is after Japan surrendered. After WWII, United States and then-Soviet Union had an agreement to temporary occupy one side each with Soviet Union taking up the north and United States taking up south of Korea as part of their joint trusteeship. The separation was meant to be temporary measure with the objective to establish a Korean provisional government before returning its freedom and independence with the unification.

Soon after the agreement, Kim Il-Sung returned after 26 years in exile in China and Soviet Union. His communism ideology was developed during his times away from Korea, he was an active member in anti-Japanese guerrilla group led by Communist Party of China and he trained with Soviet troops. Although at that time, Kim Il-Sung was not the head of the Communist Party, he was appointed as the head of the provisional government. He formed Korean People’s Army and Joseph Stalin provided them with modern military equipments.

Meanwhile in South Korea, United States helped to administer a provisional government and made Syngman Rhee who is an anti-communist the president. He and many Koreans were not in favour of the trusteeship. During Daegu Riot in 1946 where there was a wide-spread of riots against the policies of United State Military Government in Korea. Policemen were killed while many were injured and martial law was declared to keep peace and order. South Korea was in the state of instability, United States decided to hold an election under United Nations hoping to calm down the situation and unify Korea at the same time.

However things were not looking so good up the North. Kim Il-Sung convinced Soviets to disallow the election at 38th parallel. General election went ahead at South Korea on 10 May 1984 (with North Korea boycotting the election) and Republic of Korea (South Korea) took over from U.S military formally on 15th August. A month after South Korea gain their independence, on 9 September 1948 Kim Il-Sung was declared the leader of Democratic of People’s Republic (DPRK) without any UN supervision on the election and it was further affirmed by Soviet Union that Kim Il-Sung’s government is the only lawful government of the country.

While North Korea became a full-fledged communist state by 1949, South Korea main policy was anti-communism and to expand their unification up north.

Kim Il-Sung sought support from Stalin for an invasion to South Korea since 1949. However it was rejected as it was not an ideal situation for the Chinese Communist were still fighting forces in China and U.S still had troops in South Korea. By April 1950, communists conquered the Chinese civil war and U.S had withdrew their troops out from South Korea. Stalin gave permission to Kim under the condition that Mao Ze Dong agreed and would send reenforcement if needed. Although Mao Ze Dong was concerned that U.S would get involved however he agreed to it nonetheless because he desperately needed aids from Soviets.

On the faithful day of 25 June 1950, with the support and aid from Soviet Union & China, North Korea crossed their first shot and invaded across 38th parallel with heavy artilleries.

At that time, South Korea was not well-equipped with tanks or heavy artilleries weapons that could defend itself from the attack. A few days after the initial attack, South Korean Army had to make the decision to blow up the bridge across Han River to prevent North Korean army from invading further. It killed hundreds of refugees from North who were crossing the bridge at that time and crippled South Korean military who were at north of Han River.  The ill-prepared South Korean Army troops reduced significantly. United State recognised this war as an essential to fight communism  hence together with UN, they send troops and military aids to South Korean and took charge of the Army.

North Korean Army attacked aggressively that by 5.5 weeks, they took over most of the land and South Korean army had retreated to south-east of Korea, Pusan.  that was about 10% of Korea and the two armies were only separated by Nakdong River, the last line of defence for the South Korean army. If you look at the picture above, the beige portion is where the South Korean were while the red shaded portion is where North Korean came attacking from. The blue line with dotted red line is Nakdong River.  Hope for South Korea’s future looked bleak, Kim Il-Sung was confident that he could reigned the whole of Korea easily. However with U.S intervention, plenty of fierce battles were fought along this river. Together, they continued to charge against the North Korean army, to regain their rightful land.

While they were fighting the war at this region, General MacArthur had his sight on Inchon Port near Seoul. It is a vital to gain control of this port as most of the North Korean troops were attacking at south-east of Korea hence they will be caught off-guard and with that, they could recapture the capital, Seoul more easily and getting supplies cut off to North Korean armies fighting in the South. After seeking Washington’s approvals, naval vessels from Japan and Pusan set off with 75,000 troops. Just as MacArthur predicted, the surprise attack was proven successful, they conquered Inchon and Seoul easily.

Soon, they pretty much reclaimed their rightful land and they continued to fight along 38th parallel. Intelligence reports cited China communists were moving their troops to North Korea however UN and South Korean Army were hungry for an unconditional victory to unify for a anti-communist Korea.

On 1 October 1950, UN troops entered North Korea, they fought hard and captured capital, Pyongyang. They were in high-spirits and confident that they would be able to conquer this war and return home by Thanksgiving. As UN soldiers charged towards Yalu River, the river separating North Korea and China, they were caught off-guard with surprise attacks forcing them to retreat back to Chongchon River to restrategised.

Then came 24th November 1950, the UN troops advanced from the West to infiltrate to Yalu River again while another troop in the east had to advance  towards Chosan. The attack was considered a success on the first day, however on the next day, the Chinese found a mountain without with no one defending so they struck back at the UN troops cutting the troops in the east and west off each other and they had to retreat once again.

Since then, they had been fighting back and forth along 38th parallel, sometimes with the Red Army formed by the communists charging across 38th parallel and other times with UN troops made their way up. Millions of lives were lost during this war.

By March 1951, UN army again march onwards to 38th parallel. This time, the US President wanted to end the war fast in order to prevent anymore lost of lives in this ruthless war.  At end of June, 1951, UN offered to make peace with North Korea. Both side had agreed to have their peace negotiation at Panmunjom, an area between North and South Korea.

However peace talk did not went smoothly at all as both sides did not want to admit defeat and expected the other party to agree to their terms and conditions to end the war. Both armies did not let their guards down along 38th parallel, they spied and crossed fires in hope to scare either side to back down at the peace table.

When the new US President came into power, he flew to South Korea, met with army at the front line, had the same ration food as the soldiers while hearing their views on ending the war.

After 3 years of constant fighting, The armistice was finally agreed upon and signed on 27th July 1953 to cease-fire between the militaries however no peace treaty was signed between them so they are still technically at war. Today, DMZ also known as Demilitarised zone is the border at 38th parallel that divided the two countries are heavily armed with militaries on both sides.

Both countries rebuild themselves after the war. South Korea went on a rapid development and economic growth. It became one of the East Asian Tiger while the other went completely opposite, North Korea is one of the last few communist countries in the world with a very mysterious insides with regular threats on firing missiles at other countries.

However most youngsters who have not been through the Korean War especially when they have no kin in North Korea do not see the benefit from the unification and hope that it is not within their times because they see it as a burden to their economy and also socially as it means having to re-educate to integrate North Korean into their developed country. 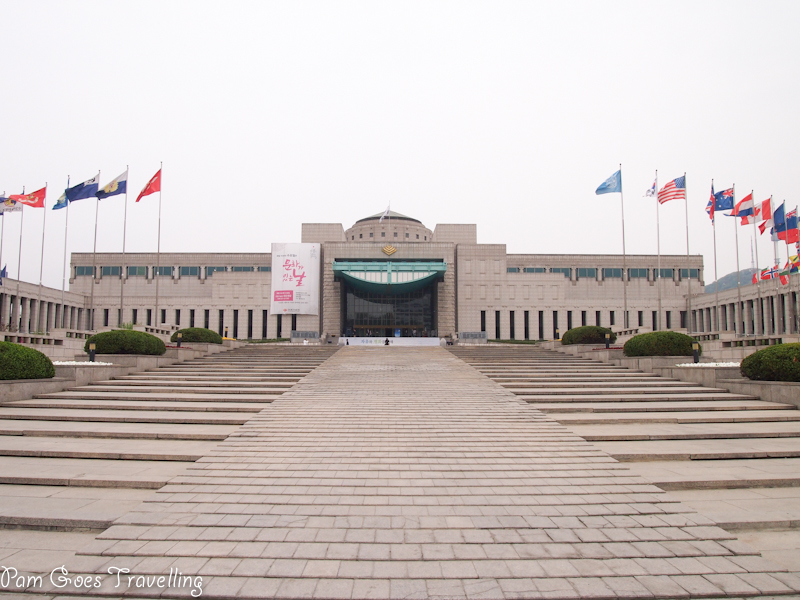 It is worth a visit to War Memorial of Korea in Seoul. It is not just about the Korean War, it also exhibits on ancient Korea history, military developments, outdoor exhibitions where military equipments were on display outside the museum. 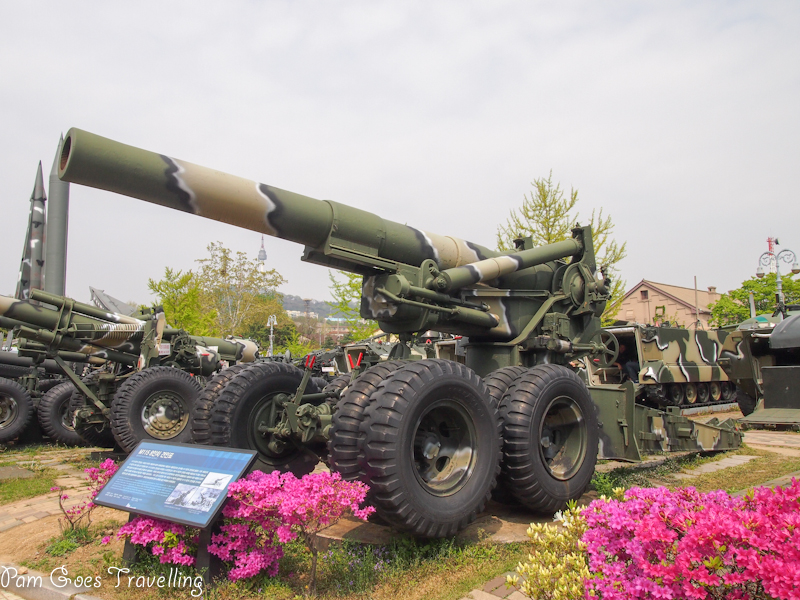 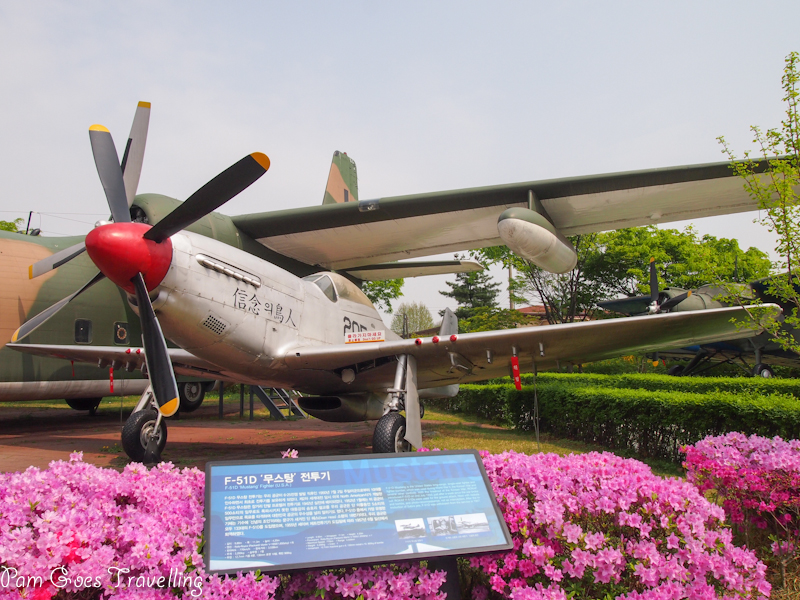 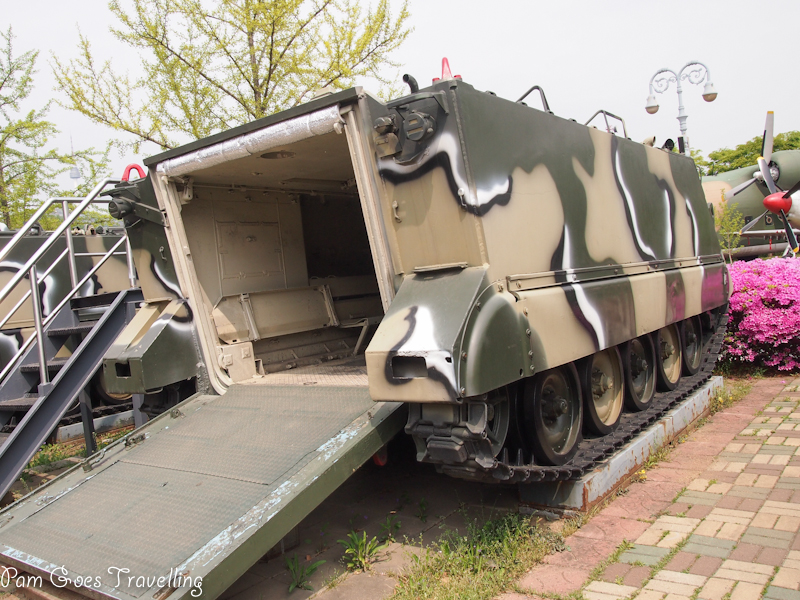 It is sad that due to political movements, it leaves what seems like a permanent division to Korea. It was a fact that left a mark on the history book which cannot be change. We can only pick up the pieces, learn the lesson and move on, creating a better future.

Leaving the post with a quote found at the steps of the entrance to the museum.

Address: 29, Itaewon-ro, Yongsan-gu, Seoul
Opening hours: 9am – 6pm (Close every Monday but if Monday is a holiday, will be closed the following day)
How to get there: Take Seoul subway and alight at Samgakji station and exit via exit 12. It takes about 5 minutes walk to reach destination.
There are also guided tours inside the museum in different languages at specific timings.

What are your thoughts on the Korean war? Share with me!

*I did some of my research on the internet, if I do get some of the historical facts wrong, please feel free to let me know.