Liverpool used to be one of the busiest port in the 18th and 19th century and it is where Beatles originates from, and also home the two football clubs in Premier League, Liverpool and Everton. 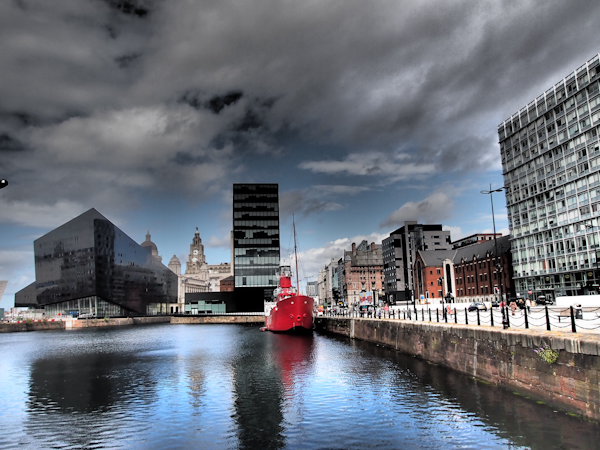 The coach ride from Chorlton Street, Manchester to Norton Street, Liverpool coach station took close to an hour, the duration is somewhat the same as taking a train however it was about half the price of the train fare.

I am not going to lie, I planned to stay 24 hours in Liverpool is solely because I wanted to visit Liverpool Football Club.

It was too early to check-in so I made my way to Liverpool waterfront where it has plenty of attractions such as museums, restaurants/ cafes/ cruise. 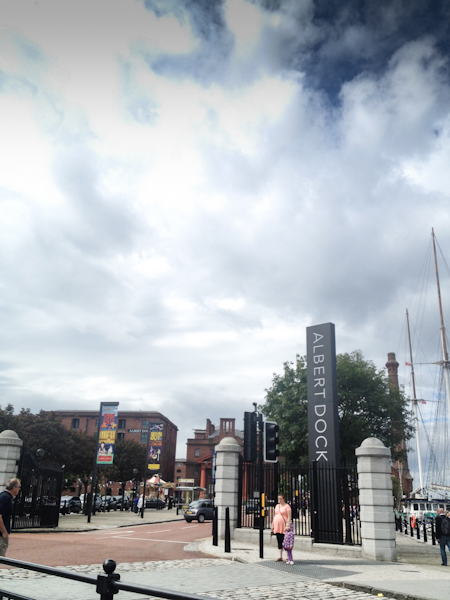 With the limited time I had, I only managed to visit 3 museums. One thing I love about museums is that it brings me through history and I learn as I make my way through. This way of understanding history is more interactive and interesting than reading boring texts from books or internet anytime! I have a habit of staring at historical objects and imagine how was it like back in those days.

Inside Merseyside Maritime Museum, I walked down the tragic history of the 3 ships that sank, one of it being the most famous Titanic which was made into movie with added love story lines. 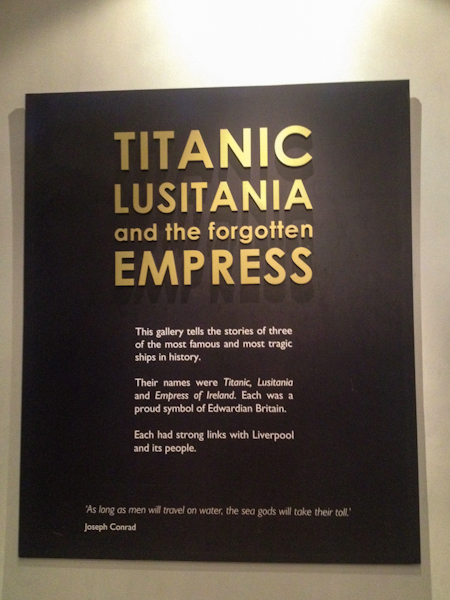 International Slavery Museum is worth a visit. It was an educational visit learning about the history and contemporary slavery and the impacted of it. There are quotes engraved on some walls which remind people on importance of  human rights and freedom. I felt wretched when I walked through the place imagined their hardships in those days. This museum also serve as a reminder why history should never repeat itself. 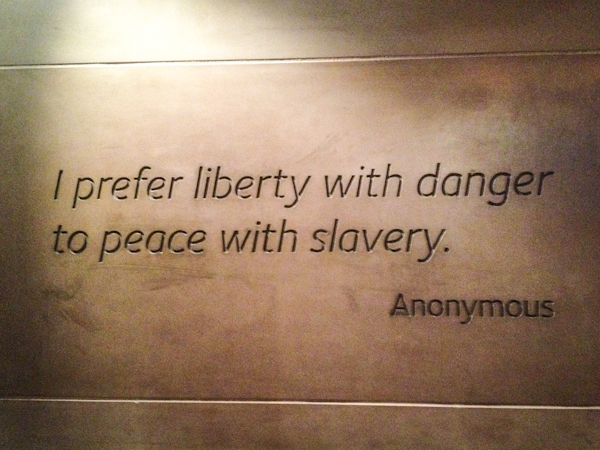 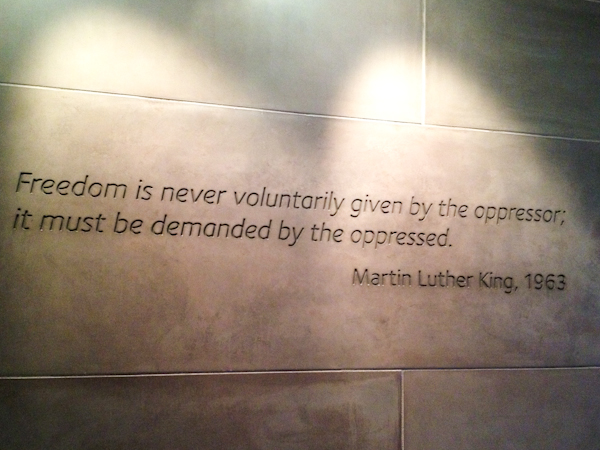 Due to the lack of time, I combed through the last one, Museum of Liverpool pretty quickly. 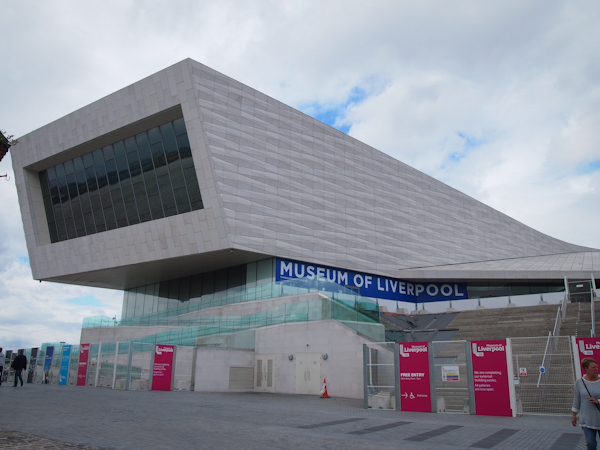 I wish I could spent more time exploring those museums and also to check out Tate Liverpool. I would love to walk around aimlessly and people watch, it is an awesome place to be.

There is also a Beatles Story attractions for Beatles fans (because it requires an admission fee).

It was funny how the weather became pretty unpredictable and change pretty fast. One moment, I was enjoying the sea breeze under the blue sky complete with white fluffy clouds, the next moment sky started to turn grey and gloomy, the wind gets colder and stronger.

In order to get to Anfield, I needed to board a bus from the main bus station at Lime Street and alight right at the gate of Liverpool FC.

Apart from my favourite team(s) in the premier league, I know little about other teams. It was only I was at Liverpool, I realised Everton’s home ground is just a few kilometres away from Liverpool’s. I always thought Liverpool FC has history that gone really far back, little did I realise that it all started on Everton. Before Liverpool FC was born, they used to play in Anfield until they move to their current location. It was due to some dispute between the committee, that was when Liverpool FC was formed. Pretty interesting snippet here.

Due to the fact that Everton FC used to play on this field and Liverpool FC is a breakaway, that explains why Everton FC logo on its gate.

After the museum and stadium tour ended, it was back to the city centre. I was expecting shops to be opened, people hanging around on the streets but it was the total opposite. It was a Sunday, shops closed at 5 and there were only a few souls walking along the streets with umbrellas because the rain refuse to stop. I was elated when I spotted Krispy Kreme kiosk. Alas, I thought I could finally sink my teeth in my first Krispy Kreme only to be informed that they are closed for the day as I set my foot in.

The thing about globalise brands is that gives you a sense of familiarity and comfort spotting one. I settled for a window seat by Starbucks, sipping on my warm cup of latte while I watched the rain trickled down the window pane and people hurried down the street trying to keep themselves as dry as possible underneath their umbrella. There was a wash of calmness and peace while I appreciated that moment. How often do I get to watch the rain and people without rushing elsewhere?

In the end, I settled for a window seat by Starbucks while sipping on my warm cup of latte as I watched the the rain trickled down the window pane and people hurried down the street trying to keep themselves as dry as possible underneath their umbrellas. It was a wash of calmness and peace which I appreciated at that moment. How often do I get to watch the rain and people without rushing elsewhere?

Grabbed microwaved food and a bottle of cider from a nearby convenience store and head back to the hotel to spend the rest of the quiet night holing up in the hotel room, enjoying every dollar I paid for.

I silently thank myself that the train tickets I booked the next morning to Bath not too early which gave me ample time for the last bit of peace before setting off.

After 4 days of madness and loss of privacy staying in hostels, I pampered myself with one and only hotel stay at Base2Stay Liverpool. It has rooms for single person and that one night of indulgence is so worth it.

It is located about 15 minutes walk from the coach station, not too difficult to locate using google map (although I must have been concentrating looking at the opposite side of the road that I completely missed the entrance to the building and had to U-turn back.)  The hotel is of walkable distance to Albert Dock, city centre and the bus station where I took the bus to Liverpool F.C, a pretty convenient location.

The staff were friendly, gave recommendations on where’s good to go and one of the staff helped me to book a stadium and tour ticket to Liverpool in advance too.

Room is cozy and bed is extremely comfortable and spacious for one person. It has a TV at the end of the bed with a good selection of channels. I can even surf the Internet with complimentary WIFI using wireless keyboard provided which is link up to the TV screen. The only downside which led me to give up surfing the net was that I need to navigate the mouse cursor with arrow keys on the keyboard. 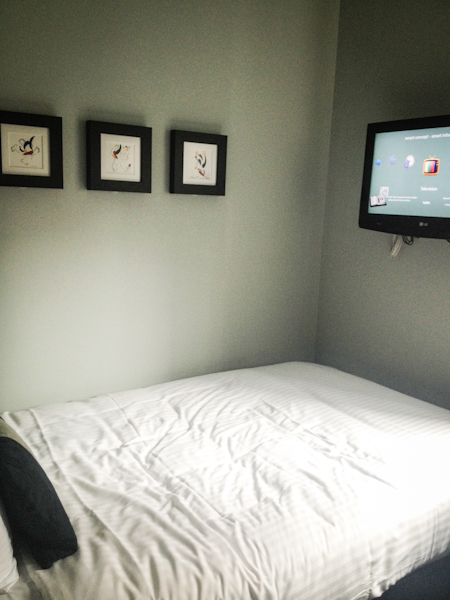 Bathroom is brightly lit and squeaky clean. Strong water pressure from the shower head and I was able to adjust the temperature to perfection. It was a welcoming change after the weak water pressure and erratic temperature from Hatters Hilton, Manchester. If it has a build-in bath tub, I will be soaking in there for hours.

There is also a mini kitchen complete with mini sink, full set of cutleries, kettle, tea, instant coffee and microwave hidden behind the door. Microwave is definitely a point scorer for me and the wine glass for my bottle of cider.

It was super value for money and I was very happy with the decision. Spent 24 hours in Liverpool, I was actually sad to leave the wonderful place the next day when I had to check out and make my way to the next destination, Bath.

Liverpool is like the exact opposite of rowdy Manchester, perhaps because I arrived on a Sunday where shops close early or maybe it was the rain which kept most people indoor but I know I will return to Liverpool again, to catch a match in Anfield and to check out other attractions in Liverpool.