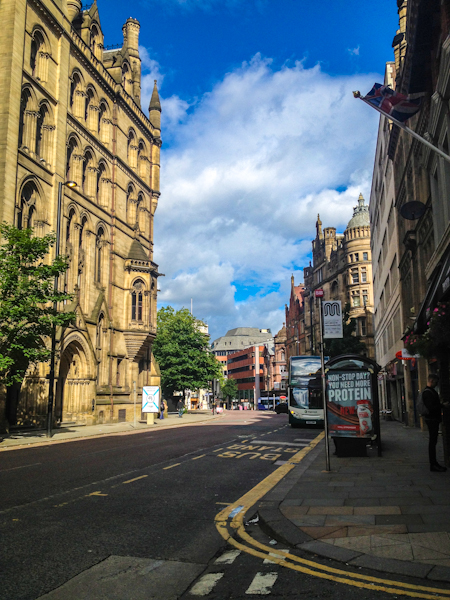 “Good luck to you!” said this Hong Kong guy I met during the free walking tour in York when I told him my next destination was Manchester. He told me that Manchester as high crime rates further more premier league have not started so he decided to skip the city.

I will take it as a pinch of salt if someone from home tells me that a place is dangerous however, coming from a fellow traveller, I know I had to to take it more seriously.

Another heart-racing moment with the train

Learning from my previous mistake, I double and triple checked the train departure time to Manchester and arrived early at York’s train station.

Studied the digital board, I remembered reading the train to Manchester will depart from platform 1 so I waited at the platform munching on my sandwich I bought from a bakery on the way to the station. As the time drew nearer, I noticed that I was the only one at the platform.

A few minutes before the train was due to arrive, I decided to check on the digital board again to reaffirm my first reading. It turned out that it was platform 11 instead! I had to climb the stairs and cross the bridge to get from platform 1 to 11. Fortunately, I made it to the train before it departed! I deduced that I have some tough fate with their trains.

The ride was about 80 minutes long. I had my iPod, favourite snack from Mark and Spencer and beautiful view to accompany me. 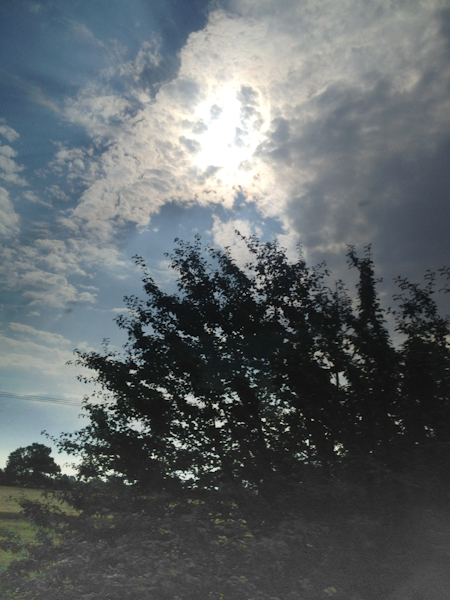 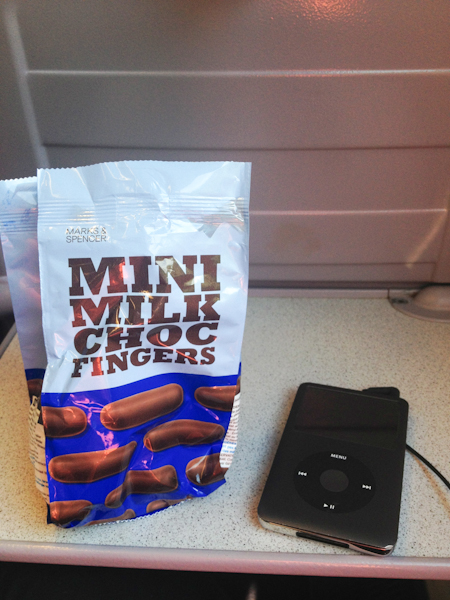 Upon reaching Manchester, I heightened all my senses when I roamed on the streets. I was armed in a printed map from the hostel but to be honest, I was relying on my google map more often.

The visit to National Football Museum certainly did not disappoint me. i think the visit to the museum before going to Manchester United home ground is a wise decision. I spent a couple of hours inside understanding the favourite sport which created such a phenomenon in England as well as other parts of the world. 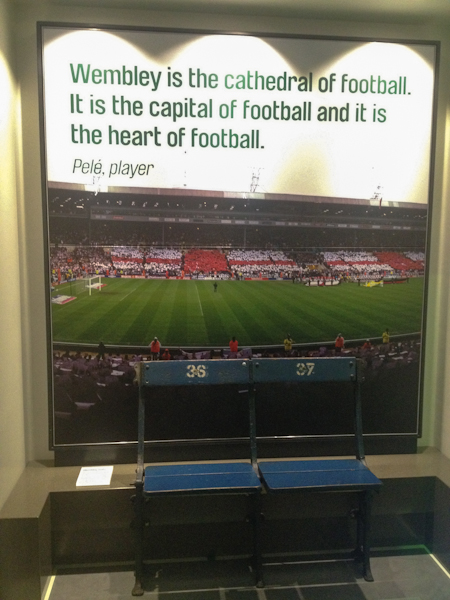 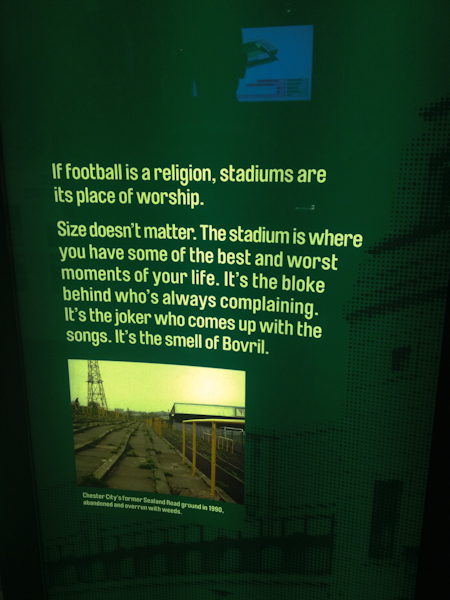 It was interesting while I explored the English football history and how it evolve together with technology and eventually also became a part of a fashion trend setting taking football into another level making it one of the money generating industry.

It was the initial step to rekindle my love for English Football again. I was in for some cheap thrill. I took photo with Michael Owen, he was the one who got me interested in football

MOSI – Museum of Science and Industry

Apart from visiting the National Football Museum, I also made it to Museum of Science and Industry. The museum is huge and is separated into different sections. Although I may not enjoy all of them but there are some which kept me well-entertained.

I became part of Revolution Manchester gallery when I had my photo on the huge digital sculpture together with other important people who powered Manchester’s revolutionary achievement (alongside with many other visitors who had their pictures taken too).

My favourite section got to be the Experiment gallery. There are interactive games which test my abilities such as agility reaction to light and sound, building blocks to make a particular shape. I learn random facts about science with my five senses.

Another interesting section is where I got to walk through the sewer which was built with 1800s bricks from Manchester sewer. I thought it was pretty cool. I got learn about sanitary conditions dated way back as well as how the toilets evolve from the early days to how it looked like now. Squat toilets never exist in the Western world.

Another which interest me was Creating the Illusion: Animation in the North West exhibition because I got to create my own animation using 4 blocks.

A working steam train which kids love! You would need to pay to ride on it though.

There are the hits, naturally there are the misses which I spent little time in. Power Hall and  Air Transport exhibitions bore me. I have no interest in those engines and mechanisms.

I spent the whole morning exploring the museum, definitely a place worth checking out.

Most beautiful library I have ever seen

When the hostel staff told me that I should visit John Rylands library, I thought what was so unique about the library but decided to check it out anyway.

Oh boy, I was in for a surprise. It is one of the finest libraries in the world, the interior of the library is extremely exquisite and it is one of the first buildings in Manchester to be lit by electricity.

I felt as though I walked into a fairytale once again, alright, it probably look more like walking into Hogwarts from Harry Potter. 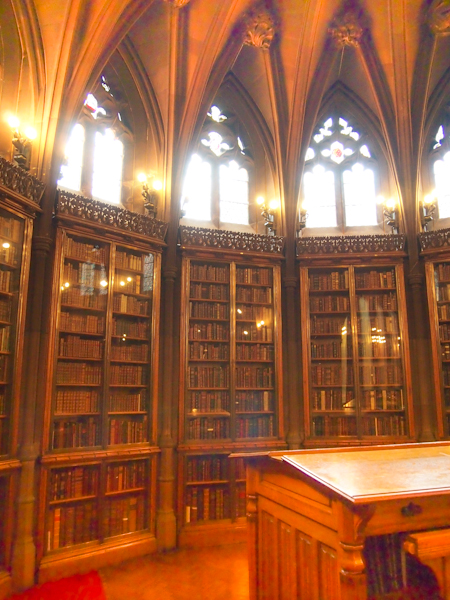 Visited St Ann’s Market, Chinatown, roam around the streets of city centre and I cannot resist walking into Primark and other shopping malls because the shopaholic inside me was dying to come out. 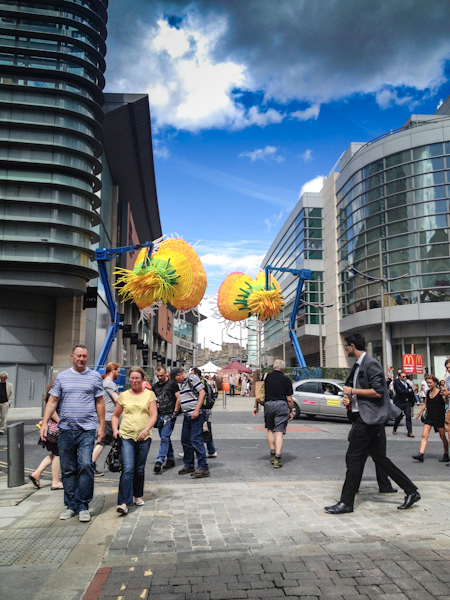 On a side note, I was glad I made some of my Primark purchases in Manchester because the crowd in London’s Oxford Street is mad crazy!

By then, I started to get sick of eating breads and sandwiches everyday, I started craving for Asian food. I was delighted to spot a stall in St Ann’s Market selling Malaysian food. Although I do not always fancy Malay food, my stomach seemed to agree with it there despite it costing like 4 or 5 times more than the price I can get here. By the time I wanted to buy in the evening to have it for dinner, it was all sold out! I had to resort to getting microwaved Asian food from Tesco. Well, at least the Asian crave of mine was satisfied for a while.

I shared a 4-bedded dorm ensuite with bathroom at one of the hostel of Hatters Group at Hilton Chamber. It seems that Manchester has pretty limited choices of hostel. It is located a distance away from Manchester Piccadilly Train Station but not too far from City Centre. It is not that difficult to find with Google map. It did not surpass my expectation but it was not as bad as how I imagine it was going to be. They issue everyone with a card to access their rooms.

I shared with room with 3 other Australian girls and was assigned the top buck. The bed was alright, I could feel the spring from the mattress and it creaked sometimes but it was not that bad, really.

In the toilet, it has a small shower area, the water pressure is not strong but at least there is a hot shower. The toilet has nothing to rave about.

There are no lockers in the room but I still have a corner for myself.

The good thing about the hostel is that it offers free breakfast such as bread, cereals, yogurts, fruits and hot beverages. At least you know you can fill up the stomach before going out to explore the city! Somehow the TV/ common room seems a little underutilise when I was there. They also offered pub crawling experience during Friday/ Saturday nights for £10 which I reckon was too dangerous for me to participate in.

Manchester has evolve into a booming urban city since the 19th century with its greatest industrial revolution with textile manufacturing particularly in cotton.

It seems to me that Manchester is just another urban city with no speciality of some sort, a lack of character. It gave me the impression that it is a rowdy place, perhaps it is due to many pub that I have seen along the roads and crowds in the urbanise city, somewhat not as safe as other cities too.

At least I manage to accomplish my teenage dream of visiting Manchester United at Old Trafford which I will leave for another post.

Is it me or is it true that Manchester has that missing x-factor?